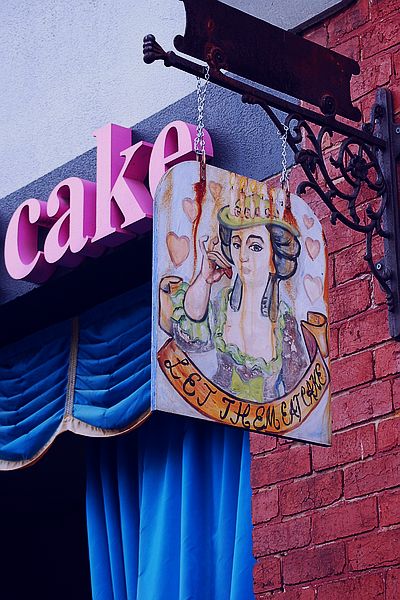 Cake in the Time of Pandemic

‘I’m known in Melbourne for this elegant, sophisticated pastry – the croissant – and the cruller is the exact opposite. It’s a super naughty New York street treat … there is nothing refined or elegant about it.’

In 2020 most Melbournians embraced the first pandemic shutdown with missionary zeal. It lasted four months, by which time everyone was fed up with the joys of domesticity. The smug delight of spending the day in pyjamas also lost its charm.

Sports gear was referred to as leisure wear – unless you became part of the tribe that jogged & sweated around the Botanical Gardens. Preferably in the pre-dawn hours with a dashing personal trainer.

Sour dough bread, making Ravioli pasta from scratch and organic Masa flour were embraced with evangelical fervour. Pretty much everything that was time consuming and a distraction from reality was thrilling.

Cults developed around online Kundalini yoga, Brazilian Zouk and circus contortion sessions. Physiotherapists sternly warned us that injuries were becoming common, due to flabby or unfit civilians limbering up while unsupervised.

There were an astonishing number of walkers out and about in the streets, sauntering along the bay promenade and bustling around the lake. Dodging other folk was difficult in the crush. Maintaining social distance an impossibility. A few people were walking their dogs several times a day.

It got to the point where some local dogs were flatly refusing to leave the family nest. An affable mongrel – who’d previously been obsessed with ‘walkies’ – was having tantrums. When his dog leash appeared, he’d hunker down on the floor and whimper as though being brutally punished. He had to be forcibly carried out the front door. With all four limbs in locked position.

Meantime the heart of the city was desolate and eerily quiet. Many city workers lost their jobs. Just getting food on the table for their family was a struggle. They couldn’t give a shite about the joy of hand rolled gnocchi or freekeh risotto.

The homeless were put into temporary accommodation but they’d already wised up and knew it was too good to last.

There were government payments available for the recently unemployed but many workers were not eligible. International students were stranded in Australia without work and no funding. Many casual workers and local university students struggled financially. Generous folk rallied and organized food supplies for those who’d been stood down.

Small family businesses were forced to shut down, driving the proprietors to the wall. Meantime several mega stores and supermarkets made record profits.

Tragic stories are still reported daily. There’s also the grim TV reminders that other countries are doing it much tougher than we are.

Cut straight to the city’s fourth shutdown – an extension of shutdown three. For those who can afford it, hunting down gourmet food has become something of an obsession. The Epicure pages of a city newspaper provides lists of where to purchase tasty baked goods such as the cruller.

For the uninitiated, the cruller is a cross between a doughnut made of choux pastry and a canelé. It’s flavours vary and may involve: chocolate pearls, dark chocolate, passionfruit, vanilla, raspberries or cinnamon sugar. But recently when a 5km travel zone was imposed on all Melbourne households, it became more difficult for citizens to indulge their latest carb crush.

There’s a small bakery shop around the corner from my apartment. It produces delectable handmade breads, gourmets pizzas and fougasse – French-style focaccia. People patiently queue up and the slow moving line often extends around the corner.

It seems most folk can no longer be bothered baking exotic breads at home. But pandemic carbo loading is still modish – especially when washed down with barista-made coffee. The added attraction being you can whip your mask off in public when eating or slurping down caffè lattes. Some wily citizens carry their empty takeout coffee cups the length of the beach promenade.

The current shutdown is easing up. But crullers and all its distant cousins, uncles and aunts remain the comfort food of choice.

Note: if you’re interested in the mother of all cakes – the Sachertorte – see REFLECTION:

Photo above: a unique bayside cake shop called Let Them Eat Cake that closed down about three years ago.