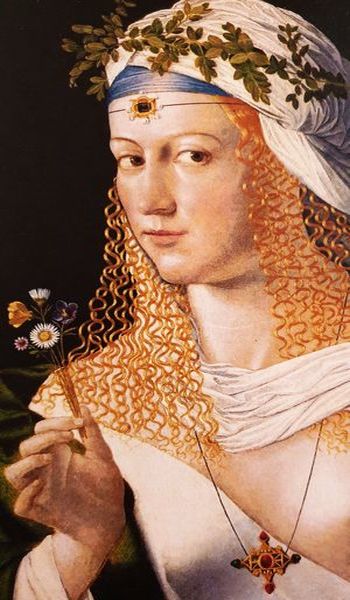 Cleopatra was frequently represented as an objectified woman. Everyone from Cicero to Shakespeare used her to their own ends and in the stoush Cleopatra was defamed, reinvented, abused, sanctified, venerated and scorned in equal measure.

Lucrezia Borgia – who was born in 1480, on the cusp of the High Renaissance – was fictionalized by French writer Victor Hugo and many other storytellers. She was the illegitimate daughter of Cardinal Rodrigo Borgia, who later became Pope Alexander VI.

Hugo’s 1883 stage play, Lucrèce Borgia was later made into an opera by Donizetti. It went down a treat as she was cast as a femme fatale who not only poisons five men – for insulting her family the Borgias – but she also organizes five coffins well in advance. Was this melodrama at work or was it meant to imply that Lucrezia always cleaned up after murdering her victims? Hugo’s and Donizetti’s fictionalization of Lucrezia Borgia seems almost quaint given what came after.

For over 500 years it has been put about that Lucrezia committed incest with her father Pope Alexander V1 and also her brother Cesare. Her other brother, Juan was found dead in the Tiber so he didn’t feature in the grubby rumours and sordid allegations.

Lucrezia has frequently been depicted as a cold-hearted murderess who was in the habit of bumping off those who displeased her. Poisoning was supposedly her forte and it was rumoured she wore a ring that contained poison – which she allegedly used to kill her prey.

Poisoning, scams, cruelty, murder, treachery, duplicity and blackmail was standard fare for Lucrezia’s father and brothers. But historians believe that it was their infamy that sullied Lucrezia’s reputation.

Had tales of her sexual promiscuity been true, Lucrezia would barely have had enough time to brush her hair; let alone give birth to seven, eight or possibly ten children. There’s not much consensus over how many children she had.

What does appear to be historical fact is that Pope Alexandra and his devious son Cesare were power hungry and they had no compunction in marrying off Lucrezia – three times – to further their own dodgy political and financial gains.

As the Borgias agendas changed, Lucrezia’s first two husbands were disposed of. However, several leading Italian families still saw Lucrezia as a catch as they desperately wanted to marry into the powerful Pope’s family.

Lucrezia was betrothed at 10 and first married at 13. Her first marriage ended when Giovanni Sforza was bullied into agreeing to an annulment on the grounds of impotence. The deal was sweetened by him being allowed to keep her dowry as a bribe. This then freed up the Borgias to warehouse her in a nunnery before marrying her off to the son of the King of Naples. But Alfonso of Aragon was strangled in his bed, to make way for husband number three, Alfonso d’Este.

Leaving Rome and the Borgias behind and moving to d’Este’s court at Ferrara, gave Lucrezia some autonomy. It also meant she wasn’t dragged down by the death of her father Pope Alexandra V1, which resulted in her brother Cesare losing power and fleeing to Spain.

Lucrezia was held in high esteem in Ferrar and she bought to the court Renaissance artists and Renaissance ideals. Having been schooled in the foundations of high culture: Latin, Greek, Italian, French, music, singing and drawing Lucrezia was well suited to court life. She also had a reputation as a fair and just governor, having been trusted to govern in both her father’s and Alfonso d’Este’s absences.

Contemporary poets and writers of the time noted her charm, grace and beauty. Bernard Zambotto dwelt at length on her ‘adorable eyes, full of life and joy.’ He also noted, ‘She has great tact, is prudent, very intelligent, lively and most pleasant.’

Such accolades were not normally bestowed on the Borgias.

Unfortunately after Lucrezia died, at the age of 39, enemies of the Borgias blackened her reputation with allegations of sexual promiscuity, incest and murder. And despite these ugly allegations remaining unproven, the myths have persisted. Whether Lucrezia Borgia was merely a pawn, a clever manipulative woman or a survivor is still being debated.

Photo: Detail from ‘Idealized Portrait of a Courtesan as Flora’ by Bartolomeo Veneto 1520, is believed to be a portrait of Lucrezia Borgia.