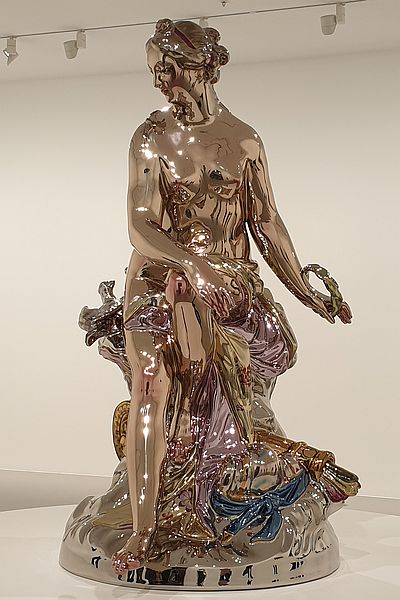 He has the slimy assurance, the gross patter about transcendence through art, of a blow-dried Baptist selling swamp acres in Florida. And the result is that you can’t imagine America’s singularly depraved culture without him.

Jeff Koons has always been a divisive artist. The late art critic Robert Hughes was not the only critic to question Koons integrity or artistic merit. Detractors named him ‘The King of Kitsch’ but Koons declared himself equal to Pablo Picasso.

Koons has much in common with the late Andy Warhol. Both appropriated other artisans work, commercial objects and domestic items to manufacture their own work and fame. Both Warhol and Koons established commercial workshops, engaging accomplished artists and artisans to produce their work.

Koons is known for his ability to link his creations to the classical ideals of philosophy. He perfected his sublime sales skills selling gallery memberships at MOMA in New York. And then successfully flogged commodities on Wall Street.

Known to her many fans as ‘La Cicciolina’ (little fleshy one), Staller was elected to the Italian parliament in 1987. Prior to the Gulf War, she offered her sexual services to Saddam Hussein – in return for Hussein freeing the hostages being held as human shields. He failed to respond.

Koon’s ‘Venus’ sculpture was purchased recently by a group of wealthy Australian philanthropists for an undisclosed fee and then bequested to the National Gallery of Victoria. It’s anyone’s guess what the bequest is worth, given that Koons ‘Rabbit’ (1986) – a three foot steel sculpture – was sold in 2019 for $US91 million ($AU131.8 million).

I viewed Koons ‘Venus’ at the NGV. It’s basically a mirror-polished, stainless steel, 2.5 metre sculpture resembling an 18th century porcelain figurine. Each and every surface reflects the gallery lights and mirrors the viewers (photo above).

Koons steel ‘Venus” has nothing in common with ‘Venus de Milo’, the ancient Greek sculpture now thought to be by Alexandros of Antioch. Created between 130 and 100 BC, researchers claim her to be Aphrodite, the Greek goddess of love and beauty. Others believe her to be the sea-goddess Amphitrite.

Venus de Milo’s expression is cool and self-contained. At home in Paris at the Louvre, she stands bare-breasted and proud. For centuries researchers have tried to find out what happened to her missing arms. She’s not telling.

The stainless steel Venus clutches a laurel wreath as she gazes listlessly at the pair of lovebirds perched close to her right buttock. Venus is treading on classical symbols such as an overturned urn, heavy drapery and possibly an abandoned chariot wheel.

No doubt when she was still a matronly 34cm porcelain figure back in the late 18th century, Venus would have quietly adorned many homely parlours.

Her creator probably never imagined she’d end up armoured in mirrored stainless steel, standing over eight feet tall in bare feet and being examined from every angle by hordes of bemused gallery patrons.

As Andy Warhol once said, ‘Art is what you can get away with.‘