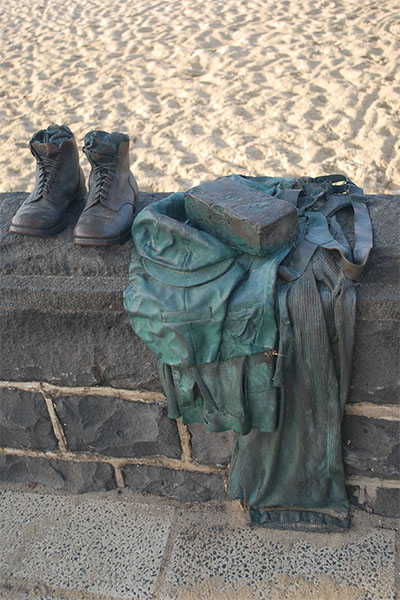 This bronze sculpture is titled: Tommy’s Story and it’s situated on the sea wall, in Melbourne’s bayside suburb of Middle Park.

I frequently pass it on my way to St Kilda and sometimes I see kids trying to lever the cap or the boots off the wall. Tourists reverently touch the bronze clothing and then take selfies posing alongside the hob-nailed boots.

An American tourist was examining the sculpture up close from every angle. He stopped me and asked, Are you from round here? Who was this dude? For there is a mystery about Tommy’s Story that speaks simply and directly to people.

Tommy’s Story has been on the sea wall for over a decade. It’s a wonderful sculpture with a back story. At one stage a local wag made a sign that read: BACK IN 5 MINUTES, and propped it up next to the boots.

The artist, Bill Perrin, told me Tommy’s Story was part of a series of public artworks marking the locals memories about place. When Perrin originally created the sculpture he patinated the bronze with subtle colors. An early photograph shows the the leather boots to be a deep polished tan, the corduroy pants a rich brown and the neb cap, shirt and waistcoat had been patinated in various shades of silver-grey. Time and sea air has broken down the wax sealant and now the sculpture is a mellow bronze color all over.

Before making the sculpture, Perrin had 1930’s clothing made by a professional tailor from scratch. The close attention to period details show especially in the cut of the trousers, the belt buckle, buttons and the waistcoat bindings. Molds were then made of the garments and boots and molten bronze was poured to create the finished piece. As Perrin expected, all the beautifully made clothing perished during this process.

The back story is that in the 1930’s – during the time of the Great Depression – there was a local bloke name Tommy who used to work across the bay on the wharves as a wharfie. It cost money to take a bath and get public transport to work. So Tommy would strip off his clothes (probably further down in Port Melbourne), leave them on the beach and then swim across to the other side, where he would put on his work clothes. After a full day’s physical work, he’d take off his work clothes and swim all the way back home.

If you’ve ever flung yourself into the icy waters of Port Phillip Bay in winter, you’ll know that this was no mean feat. Some days the sea would have been so choppy and devious that it would have been a struggle to make the distance. Tommy must have been a very fit, skilled swimmer to make it all the way across and back every single working day. And many of those swims would have been done in the pre-dawn darkness of morning or possibly late at night.

As Julie Shiels, the creative director of the project puts it,
‘Traditionally, a monument like this would represent the man. However in this work, the absence of the body, and therefore a specific identity emphasizes the egalitarian nature of working class values. Tommy is a monument to all men who wore the working man’s clothes.’

Tommy’s Story by artist Bill Perrin, is part of a City of Port Phillip project: Margins, Memories and Markers.

Photograph (above) by Lesley Truffle.