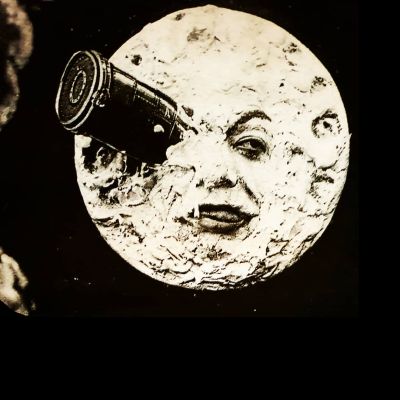 The Man in the Moon

Half a century ago Neil Armstrong and Edwin ‘Buzz’ Aldrin walked on the moon. On July 20 2019 their moon landing of July 1969 will be celebrated worldwide. Given that there’s no atmosphere on the moon, it’s possible that Armstrong and Aldrin’s footsteps may still visible on the moon’s surface.

Well before man landed on the moon artists, filmmakers, writers and other creatives were busily imagining what the moon looked like. Opium smokers and others who dabbled in out-of-body experiences also wondered if the moon really was made of blue cheese and desperately hoped the Man in the Moon did exist.

The moon has been a source of inspiration for film makers, poets, musicians and writers for centuries. The benevolent moon appears frequently in  Coleridge’s poem, The Rime of the Ancient Mariner and many favourable events occur by moonlight.

Right across the world, La Lune has provided inspiration for myths and legends. Indigenous Australians for over 65,000 years have observed and depicted the heavens, moon and stars in their artworks, myths and ancestral stories.

Released in 1902, Georges Méliès silent film, A Trip to the Moon created a sensation. Méliès was inspired by Jules Verne’s books and also by HG Wells’s, The First Men on the Moon.

Known as Le Voyage Dans La Lune, the film is deliberately theatrical and anti-Imperial. Méliès satirized nineteenth-century French society, ridiculed physics and the pomposity of some scientists and astronomers. Yet the film also dwells on the wonderment and beauty of our mysterious universe.

The French film became popular internationally and was pirated by other film studios. It was ahead of its time in terms of its production values, narrative qualities and special effects. It was an expensive film to make and bootlegged copies and price standardizations meant that Méliè was ruined financially.

I’ve just watched A Trip to the Moon again and I really enjoyed Méliès sly humour. The rocket is fired into space by a cannon amidst a lot of chaotic pomp and circumstance. The ‘marines’ are played by a cheeky bunch of chorus girls in short shorts and sailor’s stripes.

When the rocket lands in the Moon Man’s eye (photo above) six elderly scientists/astronomers disembark, armed only with umbrellas. Wicked moon creatures give them merry hell. Méliès used professional acrobats, gymnasts and dancers and their antics are humorous.

While the scientists sleep, the constellations reveal their wonders; shooting stars, winking stars with human faces and old man Saturn spying on them from a window on his planet.  Lovely Phoebe  – the moon goddess poised on her crescent moon swing – wakes the scientists with a snowstorm.

In 1925 Méliès had been reduced to selling toys and sweets at the Gare Montparnasse in Paris. He didn’t gain full recognition for his work until 1931, when he was awarded the French Legion of Honour.

No doubt many movie lovers deeply regret that in 1917, during World War One, the French military occupied Méliès studios. The army melted down his films, extracted tiny amounts of silver and used the celluloid for manufacturing boot heels. What a tragedy!

Photograph: The Man in the Moon from, Le Voyage Dans La Lune (A Trip to the Moon) 1902. Starring, directed, produced and written by Georges Méliès.