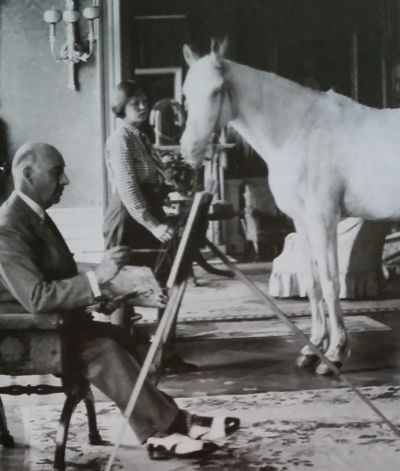 I’ve just finished reading a marvellous non-fiction book titled, The Mad Boy, Lord Berners, My Grandmother and Me, by Sofka Zinovieff. It’s a true account of life at Faringdon House.

Gerald Berners was an aesthete in possession of wit, acute intelligence and great charm. He was prone to dramatic mood swings, frequently followed by exuberance. Prior to visitors arriving, Farningdon’s white doves would be bathed gently in coloured dyes, dried off and then set free to form a cloud of flashing colours. Plumed birds-of paradise, flamingos and storks strutted around the gardens and freely entered the house.

Salvador Dali loved Faringdon and became smitten with the large tower, a folly, that his Lordship had built on the rural property. Zinovieff writes that Gerald – like many other humourists – recognized ‘frivolity as the most insolent refinement of satire’.

In about 1931, Gerald fell in love with a man twenty-eight years younger than himself. Robert Heber-Percy was twenty years old and known as The Mad Boy. He had a reputation for bad behaviour and had no desire to conform, even though he’d been raised in aristocratic circles and provided with an expensive public school education. The Mad Boy knew the rules and conventions but chose to flaunt them.

One of my favourite scenes in Zinovieff’s book is when Robert is entertaining some dreary hunt members in the drawing room. Gerald chooses to avoid them but then requires a book from the drawing room. So he covers himself in a large rug, slithers into the room on all fours, removes the book without revealing himself and slithers back out. When Robert asked him later why he’d done that, he coolly replied, ‘I didn’t want to draw attention to myself.’

What I loved so much about this book is the detailed observations of the eccentric, clever, bohemian characters. Nancy Mitford and her siblings were made welcome at Faringdon as were the Sitwells, Elsa Schiaparelli, Evelyn Waugh, Cecil Beaton, Alice B. Toklas, Gertrude Stein, Marchesa Luisa Casati, Nöel Coward and many others. It was customary for Gerald’s and Robert’s friends to take the train to Oxfordshire and spend the the whole weekend at Faringdon. And they all signed the visitor’s book.

The style with which Gerald Berners spent his days; free of monetary concerns and actively creating art, music, exquisite parties and theatrical events seems to me to be a wonderful way to live. So many interesting people partied at Faringdon over the years and the author details their excesses, love affairs, disasters, creative endeavours and feuds.

The photographer, Cecil Beaton, doesn’t come off well at all. He and Robert loathed each other. Robert spread the story that initially Beaton had found him, divine. While staying at a friend’s country house, Robert tricked Beaton. He provided him with a hand-drawn map, directing Beaton up to his bedroom – supposedly for a late night assignation. When Beaton snuck up there in the middle of the night, he found himself in Gerald’s bedroom instead. Gerald sat up in bed with a knowing grin and murmured, ‘Cecil, I never knew you cared!’ Beaton put up with the teasing that followed but referred to Robert as Horrid Mad Boy.

Many years later, the Mad Boy had the pleasure of punching Beaton on the nose over a published personal insult regarding Gerald. Naturally the whole of London heard about the fight. Robert demonstrated no remorse and publicly declared that his action had made him feel much better.

Fortunately, well before the altercation, Beaton had already taken several photographs that appear in Zinovieff’s book. And it is these photographs, along with the work of other photographers, that contribute to the feeling that you’ve actually met Faringdon’s many visitors and maybe even dined in style at Lord Berner’s splendid table.

Photograph: Lord Gerald Berners painting Moti, a visiting horse, who was made most welcome inside Faringdon House. Moti was also photographed having afternoon tea in the drawing room and peering out the front door. From ‘The Mad Boy, Lord Berners, My Grandmother and Me’, by Sofka Zinovieff. Vintage publication 2014.