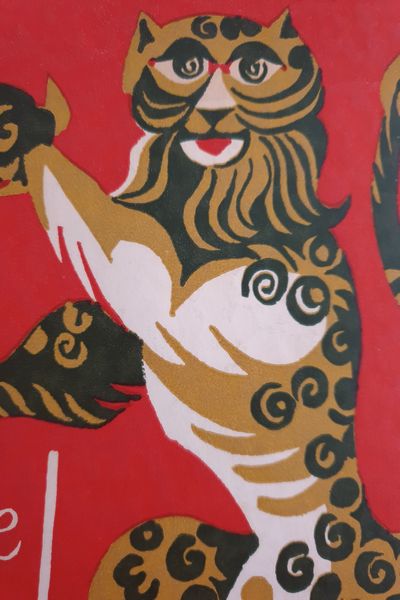 One of the most astonishing things about the novel, The Leopard  is that it was initially rejected by major publishing houses. Yet when it was finally published in 1958, it was acknowledged to be a masterpiece.

Unfortunately by this time the author, Giuseppe di Lampedusa had died at the age of sixty from lung cancer. Having found out that he only had a short time to live, he’d rushed to get the novel finished in the last few months of his life.

The Leopard went on to become one of the most loved and bestselling Italian novels of the twentieth century with about 3.2 million copies being sold initially. The story resonated with many generations and has been translated into several languages.

Although the novel was written in the mid twentieth century it reads as though it’s an exquisitely written nineteenth century novel. The tale is based upon Prince Lampedusa, the author’s great-grandfather Giulio Fabrizio.

Sadly The Leopard was Lampedusa’s first and last novel. However, Lampedusa also wrote extensively about English and European literature and created a novella. His private letters were published just a few years ago.

The author was born into a distinguished Sicilian aristocratic family in 1896. He fought in World War One and he was held prisoner before escaping a Hungarian POW camp. He suffered a serious nervous breakdown in his twenties and was extremely shy. Lampedusa later married Alexandra von Wolff-Stomersee, a leading psychoanalyst, and they remained child free. Upon realising he was destined to be the last Prince of Lampedusa, he decided to would write a novel about his vanishing world.

I keep sneaking back to the classics and I’ve reread The Leopard several times.  It’s essentially a tale about Sicilian aristocrats and the decline of the Prince of Salina’s noble house. The Prince (known also as Don Fabrizio and the Leopard) divides his time between coming to terms with Italy’s constant upheaval and his nephew’s political machinations. Tancredi Falconeri informs the Prince, ‘Everything must change so that everything can stay the same’.

There are exquisite scenes of Don Fabrizio dining with his large family and assorted visitors and interlopers. The author was a gourmet and in private letters which were later published (Letters from London and Europe) he writes about fine food. While visiting York in 1927, Lampedusa dwells ecstatically on ‘large thick slices of rosy ham, lying on beds of soft real bread’.

The author was very taken with English cuisine, especially toast and English cheeses. He loved ‘sinking a greedy spoon into the supplies of the lordly cheeses of Chester, rosy as onyx, or Stilton, green as aquamarine, or Cheddar, transparent and amber-coloured’.

Film director, Luchino Visconti, loved Lampedusa’s novel so much that in 1963 he made it into a marvellous film titled, Ill Gattopardo (The Leopard). The film starred Burt Lancaster in the title role, with Alain Delon in his prime as his nephew and Claudia Cardinale as the sleazy Mayor’s beautiful but cunning daughter.

No expense was spared in the production of Visconti’s film. It’s magnificent to look at, especially in the Director’s Cut version. Burt Lancaster mentioned that Visconti filled the Prince’s chests with the ‘finest broadcloth and silk shirts’. Even though these items were never seen by the camera, they were a known presence to actors and crew.

photo: detail from the 1963 hardcover copy of ‘The Leopard’ by Guiseppe Tomasi di Lampedusa. First published in Milan in1958.