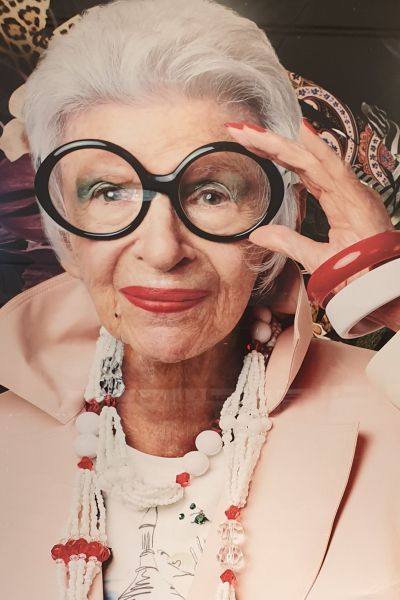 The Elixir of Youth

Many of us believe that in today’s era of Botox and extreme cosmetic surgery, Chanel’s statement no longer applies. A scan of Hollywood’s red carpet affairs, shows actors for whom time has stopped. Often the effect is bizarre because their faces look cyborg frozen rather than tantalisingly youthful.

Iris Apfel – interior designer, model and fashionista – is 97 and utterly fabulous (photo above). Iris became a superstar at 83 and is wickedly outspoken.

‘If you’re 75, nobody’s going to think you’re 32. People who lie about their age are dopey. And getting carved up and trying to make your face look years younger is so stupid. Your hands are a dead giveaway.’

Many cultures have sought the secret to eternal youth. For centuries alchemists tried to find the formula, and numerous conmen claimed they’d actually found it.

Faking a youthful appearance is fraught with danger and poisons have been used for centuries to provide the illusion of youth.

Queen Elizabeth 1 and the ladies of her court applied Venetian Ceruse to their face, throats and décolletage. Pale, smooth complexions were all the rage, symbolising youth and fertility.

Another beauty trick was Belladonna eye drops (from the toxic plant Deadly Nightshade) which caused pupil dilation. These drops became popular with courtesans to feign arousal. Unfortunately excessive use can cause blurred vision or blindness .

The ancient Chinese believed that ingesting precious substances such as jade or gold would provide longevity and eternal youth. Poisons were also taken. A lethal dosage of mercury, supplied by alchemists, is suspected to have caused the death of the Jiajing Emperor in the Ming Dynasty.

In the eighteenth century alchemy, the occult, black magic, necromancy (communicating with the dead) and witchcraft were in favour. Imposters, shysters and conmen infiltrated every level of society.

Giacomo Casanova in his ‘History of My Life’ details his extraordinary conning of a gullible aristocrat in the late 1700’s. Marquise d’Urfe was 63, filthy rich and devoted to the occult. She rewarded Casanova handsomely for claiming he could reincarnate her as a baby.

He somehow convinced the aristocrat that she would give birth to a child who would carry her soul. Casanova cast several bizarre spells and had three bouts of sexual intercourse with the Marquise. Eventually she wised up and Casanova left town quickly.

Queen Elizabeth 1 died in 1603 at the age of 69 and the cause of her death is disputed. Historians suggest it may have been pneumonia, cancer or even blood poisoning. Apparently she’d been steadily losing her hair and was suffering from extreme exhaustion, memory loss and digestive issues. All of which are symptoms of lead poisoning.

As Elizabeth 1 got older she sought to present herself as ageless. She ensured that laws were created which prohibited the circulation of portraits that were not flattering to Her Majesty.

However, this did not mean that realistic portraits of Elizabeth 1 were not painted. Recently a 1595 portrait of Her Majesty was authenticated showing Elizabeth with deep wrinkles, eye bags and a distrustful expression. By that stage of the game Good Queen Bess probably had a lot to be a suspicious about.

Clearly the Renaissance ideal of youthful beauty was a difficult illusion to maintain. Not much has changed.