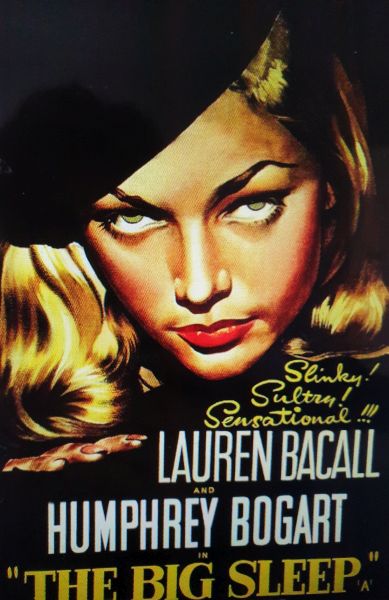 It seemed like a nice neighbourhood to have bad habits in.

Raymond Chandler from The Big Sleep 1939.

I’ve been reading a Philip Marlowe detective novel that was not written by American author/screenwriter Raymond Chandler (1988-1959). I found the novel The Black Eyed Blonde engaging but somewhat disconcerting.

Chandler wrote seven Marlowe detective novels and some became film noir classics. Many Hollywood leading men played Marlowe. But Humphrey Bogart has become synonymous with Philip Marlowe – despite the private dick being more handsome and much younger in Chandler’s novels.

Chandler’s character Philip Marlowe is a hard drinking, wise cracking, hyper intelligent private detective with a choice line in witty sarcasm. Despite his grungy lifestyle and the criminals and ‘lowlifes’ he mixes with Marlowe is a man of high principles.

He can’t be bribed to violate his personal standards and beliefs. Marlowe regularly gets shot or bashed up for refusing to double-cross a client or divulge confidential information.

Banville makes Marlowe considerably more introspective and empathic than Chandler created him. He also has a kinder and more generous attitude to women. It could be said that Banville’s Marlowe has been humanized and made more palatable for 21st century sensibilities. But is this necessarily a good thing?

Chandler’s/Marlowe’s toxic attitude to women doesn’t go down well with feminists or the #Me Too movement. Much has been written about Chandler being a misogynist who objectifies and diminishes women.

The one exception is probably Anne Riordan in Farewell My Lovely who is clever, kind, generous, loyal and trustworthy. Marlowe not only dismisses the idea of becoming romantically involved with Riordan but he’s patronising, ‘There’s a nice little girl, for a guy that’s interested in a nice little girl.’

In the later Chandler novels Marlowe acknowledges he’s been tainted and compromised by his years working in the underbelly of The City of Angels. As he puts it in The Long Goodbye – ‘I was as hollow and empty as the spaces between stars.’

But despite the undeniable sexism of Chandler’s Marlowe, I still prefer him to Banville’s rehabilitated Philip Marlowe.

Noir detective novels don’t dwell on the sunny side of the street. And Banville ensures the world according to Philip Marlowe is dark, dangerous and treacherous. He also furthers the storyline of a previous Chandler novel in an inventive way.

But what I miss the most in The Black Eyed Blonde is the absence of Chandler’s cutting wit and sarcasm. His black humour was often quite twisted and being unique to Chandler it cannot be easily replicated.

Chandler’s humour is also unconventional. So for example, it may result from Marlowe glumly smoking as he contemplates something as ordinary as a weathered garden gnome. At other times he riffs on incongruent ideas by improvising and toying with his gut feelings about a particular criminal or oddball. But often – given the detective is regularly drunk or hungover –  he’ll be lying in bed chain smoking and tossing off bizarre universal truths.

She gave me a smile I could feel in my hip pocket.

The girl gave him a look which ought to have stuck at least four inches out of his back.

Guns never settle anything, I said. They are just a fast curtain to a bad second act.

Don’t kid yourself. You’re a dirty low-down detective. Kiss me.