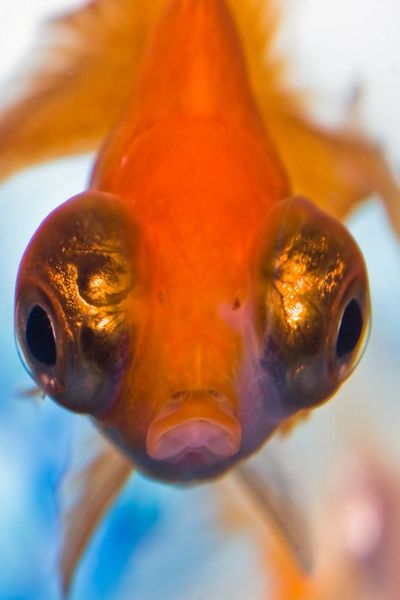 The first theatre play that I wrote, involved a character named Alphonse. I’d been fortunate in that I’d been offered a mentorship with a professional director. The Australia Council for the Arts also offered me a rehearsed reading in a city theatre with the director, professional actors and an audience.

It was decided that the actors would perform in costume. I was delighted and promptly decided Alphonse should appear on stage too – even though he had no lines.

Alphonse was described in my character notes as a most attractive goldfish with flashing golden fins and bulbous eyes. In the play, his owner Sasha informs the audience that she regularly communicated with Alphonse. It was a meeting of minds and they communed in silence.

Sasha also claims Alphonse possessed a very wicked sense of humour. He was a committed Buddhist with a deep understanding of the ways of the world.

I should mention that the play was essentially comedic with dark underpinnings. Several of the characters were dodgy criminals and the action took place on the wild, wild West Coast of Tasmania. Most of the criminal characters operated purely on self-interest and created trouble for everyone in town.

Much later I expanded the story and it morphed into my second novel, The Scandalous Life of Sasha Torte.

It was high summer and on the day of the event it was fiendishly hot. The sort of heat that almost melts car interiors. But I was determined to find a goldfish who seemed utterly and completely Alphonse. So I drove down to my local pet store and after spending a lot of time observing the fish, selected a plump male goldfish.

He was handed to me in a plastic bag pumped up with air and secured with a thin rubber band at the top. This did not generate confidence. I panicked as Alphonse and I drove across town to the playhouse. I imagined all kinds of ghastly scenarios – the plastic bag bursting, a car crash detaining our arrival or Alphonse dying from stress or heat stroke.

Fortunately, all went well and the air conditioning at the playhouse was superb. Alphonse was quickly decanted into a cool round glass bowl for the evening’s performance. He was frisky and seemed quite the extrovert.

A friend who’d provided Alphonse’s fishbowl, tried to soothe my nerves by whispering in my ear, ‘Don’t worry, darling. Even if they absolutely hate your play, they’re going to love my fishbowl.’

I had to laugh. While we waited for the audience to be seated, John further confided that the fishbowl was a survivor from his recent divorce. He told me that the marvellous thing about glass and crystal wedding presents, is that the divorcing couple then have a cupboard of breakables on hand. And during the ongoing hostilities the fighting couple can hurl their wedding gifts around the room and thoroughly enjoy the drama.

The play started and I got the impression there was trouble looming. The lead actor got half-cut on wine both before and during her performance. At rehearsals, I’d been concerned that that she might be too controlled/self-possessed for the role.

But that night she ripped into her lines – while tossing back more wine on stage – and did brilliantly. Meantime Alphonse circled lazily in the fishbowl, eyeballing her approvingly. His performance was faultless and he hogged more than his fair share of attention.

We had a champagne party afterwards to celebrate. I was chuffed when several audience members and a professional playwright told me that they’d really loved my play. Everyone wanted to meet Alphonse and a couple of blokes – who were somewhat inebriated – lent over his bowl and had a long conversation with him.

At the end of the evening, Alphonse was transferred into a waiting jar and transported to his new home. A couple I knew had installed an upmarket fishpond in their garden. There were already several goldfish in residence – but for unknown reasons they’d failed to breed in the pond.

I heard nothing about Alphonse for weeks. Then I got a phone call from my friends – all very excited – reporting that they’d discovered several tiny new goldfish hiding in the pond reeds.

It turned out that Alphonse was an unrepentant libertine who’d wasted no time in making amorous overtures to the female goldfish and chasing them around. I couldn’t help but wonder if Alphonse’s star performance had greatly increased his self-confidence. To the point that he felt up to the task of seducing an entire fishpond of female fish.