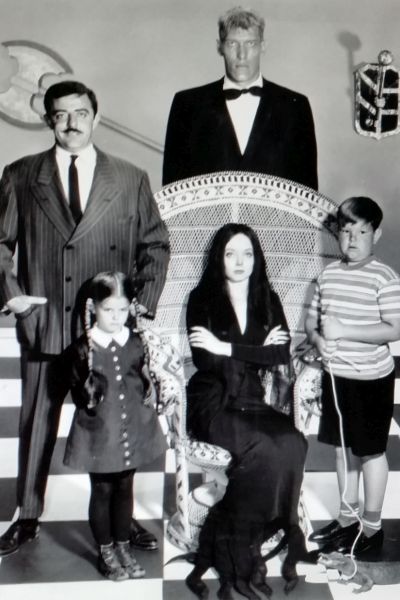 I was born in London but raised in Australia by English parents. The second house we lived in was referred to by my mother’s friends as ‘Little England’, while local kids called it ‘the Addams family house’.

I thought their insult gave our place cachet, as there were replays of the 60’s sitcom on TV and it was very funny. I’d only seen a couple of episodes as my TV viewing could only be done when visiting friend’s houses. My mother thought television was terribly ‘ suburban ‘ and quite unnecessary. Interestingly enough, once my parents divorced they both bought televisions.

Admittedly our house was a spooky when viewed from the front gates. And it seemed sinister because of all the tall pine trees that overshadowed the house. Our house wasn’t like the suburban brick houses lining the street. Its decorative half-timbered exterior, steeply pitched gable roof and over-scaled chimney made it an oddity.

It was rumoured the bachelor who’d built the house in the 1930’s had been a homesick Englishman. Apparently, he’d created a Tudor-style house on a small scale, with solid oak beams, leadlight windows, a large open fireplace, and quirky nooks. His pretensions to the Tudor’s grandeur were undermined by the small rooms.

This was a bit odd, given the size of the block of land which was large and could easily have sustained a bigger house. But it also meant that the front garden was big, with many mature trees and an enormous ghost gum leering over the front gates.

My mother spent a lot of time decorating each room with antiques and faux antiques. Each room had a colour theme. Visitors remarked the red dining room with its shining silver, champagne bottles and red glassware looked like Christmas.

She also gave free reign to her taste in heroes. Napoleon Bonaparte featured heavily fighting campaigns in brutal locations and lousy weather. I felt sorry for his horses who were always depicted falling down ravines or stumbling across snow-capped mountains.

Hanging above the telephone, just below the leering gargoyle lamp, was an etched print of Napoleon as a sullen faced baby.

When randy schoolboys were on the phone, unsuccessfully trying to chat me up, I’d catch Napoleon eyeballing me disapprovingly. He wasn’t the only one either. The gargoyle seemed to be smirking at the absurdity of it all. Whereas my mother didn’t give a damn.

Our house looked substantial but some of the woodwork wasn’t as solid as it looked. The hallway – which appeared to be panelled in solid oak – was comprised of flimsy wood that creaked when one of us kids was shoving the other against the panelling.

When my sister and I had been banished to the kitchen – so my parents could entertain the adults with fine cuisine and copious quantities of red wine – we ensured the guests got to hear the creaking panelling. Our subversive actions were guaranteed to make my mother lose her sophisticated English cool.

I remember deeply regretting I hadn’t been born into the Addams family. Their two children indulged in inappropriate and outrageous behaviour but they were loved by their parents and relatives. Lurch may have been surly but he really looked after and protected the Addams family kids.

And because the Addams family was so whacky it was their straight, dull neighbours who came off as being strange and dysfunctional.

Photograph: The Addams Family – Lurch the family butler, Gomez Addams who is madly in love with his elegant wife, Morticia Addams, Wednesday their daughter and Pugsley with his pet crocodile.