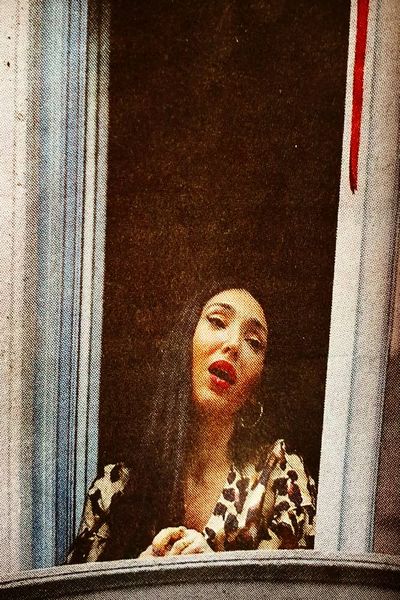 ‘andrà tutto bene – everything will be fine.’

The Italians are living in the European COVID-19 epicentre and Italy is currently under emergency quarantine measures. To date there are more than 24,700 people with the disease and more than 1800 have died. Italy has a world class health system but it has been stretched beyond capacity.

But despite domestic isolation and deprivations, the optimistic saying, andrà tutto bene, has appeared on flags, children’s paintings and the social media.

Journalists have verified that there’s solidarity among Italy’s citizens. From Northern to Southern Italy, apartment windows and balconies are draped in Italian flags.

And despite the fact they can’t meet with friends for a tipple in a bar, the fine tradition of aperitivo – a pre-meal drink to stimulate your appetite – is being retained.

Italians have been photographed out on their small balconies, wineglasses in hand and toasting their neighbours. Alternately, via video chats they indulge in a shared ‘virtual aperitivo’.

Meantime in Milan, opera singers and confident amateurs sing out their windows in an effort to raise everyone’s spirits.

I once lived in an apartment next door to a professionally trained opera singer. The decaying Deco building had a lightwell between my apartment and Marguerite’s.

I often heard her melodic voice, drifting out her bathroom window and into mine, as I reclined in the bathtub. The plumbing was ghastly – taps dripped and pipes rattled – but at those times I didn’t give a rat’s arse. I felt optimistic.

During Australia’s recent bushfires there was a spirit of altruism and genuine caring about those who were suffering. Folk rallied to help both financially and practically and there were many stories of heroism in the face of destruction.

At Mogo Wildlife Park on the NSW coast, about sixteen staff refused to abandon their animals as the fires swept into town. Many were large animals who couldn’t be quickly moved. Unaided and equipped with only the zoo’s resources, the animal carers fought the flames and saved 200 exotic animals. These included: giraffes, gorillas, lions, marmosets, rhinos and boa constrictors. Not one animal died, they were all safe and cared for.

When the sky darkened as the fire came down, the giraffes panicked briefly and galloped as a herd. But essentially the animals remained calm and cooperative. Probably because they’d built trust relationships with their human keepers.

With the impending shutdown in Melbourne there’s been a lot of panic buying and product hoarding. Hopefully this will ease off. And with any luck folk will calm down and we’ll all start making better decisions.

And then, andrà tutto bene – everything will be fine.

Image: Opera singer, Laura Baldassari sings out her window in a bid to raise spirits in Milan. AP photo The AGE.