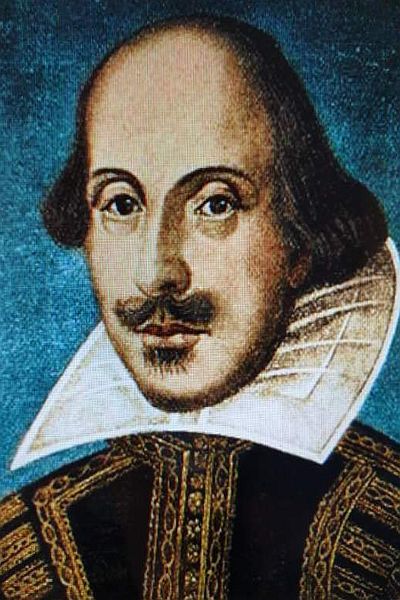 And now, instead of mounting barbed steeds

To fright the souls of fearful adversaries,

He capers nimbly in a lady’s chamber

To the lascivious pleasing of a lute.’

I went to a girl’s high school in Melbourne and was lucky to have a wonderful literature teacher in my final year. She was an intellectual who really knew how to lever Shakespeare off the page and into our devilish imaginations.

I well remember the night the whole Literature class went into the city to see a brilliant international cast perform Shakespeare’s ‘King Lear’. Oh my God, the swooning that went down when wicked, wicked Edmund was physically bound to the wheel of fortune. The wheel was a huge wooden prop that had already been used as both bed and table.

So there we had the very evil Edmund – the ‘bastard son of Gloucester’ – sweaty, shirtless, with muscular biceps and skimpy tights barely concealing his pronounced assets. We schoolgirls all morphed into Shakespeare groupies that night.

The actor playing Edmund  – like the rest of the cast – was classically trained and he ripped through Shakespeare’s rich prose, bringing it to life and effortlessly defying the shonky acoustics of the grand old theatre.

I was not the only young lady present who promptly shifted her loyalty to Edmund and dumped his kind, nice brother Edgar. We didn’t give a damn that Edmund had already had his way with the cruel and capricious sisters, Goneril and Regan. Nor did we care that Edmund was playing them one off against the other. For having been introduced to Emily Bronte’s, Heathcliff (Wuthering Heights) a few of us had already developed a taste for bad boys.

Back in the 1600’s Shakespeare had to please royalty, gentry, trade folk, the bourgeoisie and the groundlings; those who filled the standing room front of stage. While the upper classes expected to be stimulated intellectually by universal truths and allusions to historical events, the groundlings just wanted to have fun and be entertained. Romance and bawdy sexual references cut it with all factions and love, revenge and tragedy became dominant themes in Shakespeare’s plays.

According to historians, if the groundlings got bored and out of hand, the actors would be given a verbal bollocking or else get pelted with rotten fruit and vegetables. Apparently the polite reverential clapping, common to contemporary Shakespearean theatre, was largely absent.

Shakespeare’s plays have been successfully adapted to suit different audiences all over the world. The Bard was a prolific playwright and has been credited with 37 plays, numerous collaborations on other plays and about 154 sonnets. It’s an astonishing feat that more than four hundred years later, Shakespeare’s plays are still in demand.

Mind you, some historians dispute not only the number of works but whether the Bard actually wrote them. Various other playwrights have been put forward as contenders. But can the mystery ever be solved? And in the scheme of things, does it really matter?

image: the Bard of Avon himself – William Shakespeare.  Cover from ‘The Unkindest Cut: Shakespeare in Exile 2015’ by American Council of Trustees and Alumni.

The portrait is after Martin Droeshout’s engraving from the Johnson/Steevens 1787 2nd edition of Shakespeare’s plays.