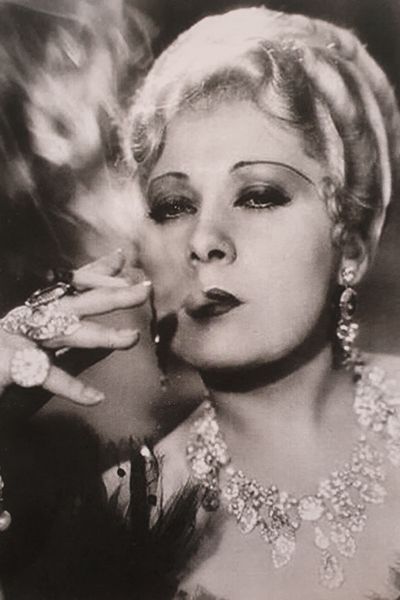 Peel Me a Grape

Hollywood legend Mae West liked her men distinctly masculine. Her taste veered towards wrestlers, boxers, prize fighters, gangsters and musclemen. At 61 she took up with Mr California, Paul Novak, who was thirty years younger. He was one of the musclemen in her stage show at the time and he remained loyal right up until her death in 1980 at the age of 87. Novak adored Mae and was quoted as saying, ‘I believe I was put on this earth to take care of Mae West.’

An earlier boyfriend, William Jones, was a champion boxer. May was appalled when Jones was barred from entering her Ravenswood apartment by management – on the grounds he was an African American. So she solved the problem by buying the whole damned block and changing the rules. Mae slept with whoever she wanted and got away with it – in an era where women were expected to be fragile, ladylike and obedient. ‘When choosing between two evils, I always like to try the one I’ve never tried before.’

Unlike her friend, the sensational Marlene Dietrich, Mae didn’t drink or smoke in real life – but she did believe in the power of positive thinking and regular colonics. She enjoyed upsetting conservative folk with her wickedly funny quips. A late-night TV interview was withdrawn after she blithely commented about the large mirror positioned directly above her bed, ‘I like to see how I’m doing.’

In many ways Mae was ahead of her time, she was a free spirited, liberated woman who was open about sex. In most of her films she played the confident woman who used her feminine wiles to get her own way. ‘Ten men waiting for me at the door? Send one of them home, I’m tired.’

Salvador Dali venerated Mae West and he created several art pieces including a plump cherry-red sofa in the shape of her lips in 1938. Years later he designed the Mae West Room; an art installation which was a surreal recreation of her face. Her flared nostrils became a golden fireplace and her eyes were formed by two abstract paintings.

Mae came late to films at 40 after starting out on the stage in vaudeville shows as a child. Much of her skill as a comedian came from spending years finessing her comic timing and testing the boundaries with her clever sexual innuendos. Somehow she always managed to keep it classy.

Her play titled ‘Sex’ was lacerated by theatre critics but it became a raging box office success. Mae characterized a boisterous, tough broad with a nasal Brooklyn accent. ‘A hard man is good to find.’ She was arrested and charged with corrupting the morals of youth. She then had to choose between being jailed for ten days on Welfare Island or pay a fine.

Mae chose jail because it provided free publicity and sharpened the public appetite for her special brand of salacious humour. She coolly informed the press that she’d been allowed to retain her silk panties instead of the prison issue underpants made of coarse canvas. Mae also dined with the warden and his wife and got off two days earlier for ‘good behaviour’.

When Mae moved to Hollywood she not only acted in movies but she also wrote filmscripts, playscripts and performed in Las Vegas and the UK. Years later she appeared on television and recorded albums. One of her albums was titled, ‘Peel Me a Grape.’ American writer Scott Fitzgerald thoroughly approved of her and noted she was, ‘the only Hollywood actress with both an ironic edge and a comic spark’.

Her trajectory upwards was rapid and she cleverly invested her money in property and land which meant her future wealth was assured. She also produced her own stage shows and retained control of her material. Subsequently by 1935 Mae West was one of the wealthiest women in the USA. Unlike other famous actresses of the era, such Marlene Dietrich, she would not have the misfortune to find herself impoverished and distressed in old age.

Mae West made her last film ‘Sextette’ when she was 85.  As she quipped, ‘You only live once, but if you do it right, once is enough.’