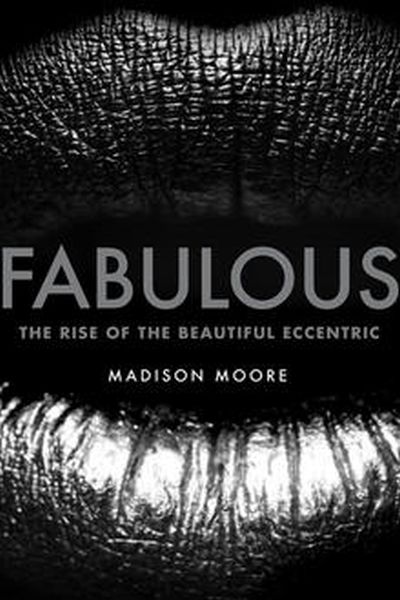 Two nights ago I attended Madison Moore’s performative presentation at the National Art Gallery, Melbourne. Madison began his lecture dressed casually in gym gear but while talking about his influences growing up and how it felt to be marginalised, he slowly began a transformation.

Madison began by cutting and tearing up his white singlet so that it resembled a dance costume. While he was chatting and snipping away behind his back, I worried that he might cut himself – but it became obvious that this is a man who knows what he’s doing.

He applied coco butter, dark lipstick and slid into a glamorous, slinky, black sequinned catsuit. Madison cheerfully informed us that he’d bought three catsuits in LA the night before. He simply had to have them. And for those with enquiring minds – yes, Madison Moore is irresistibly fabulous!

At the end of his presentation Madison played Sylvester’s 1978 nightclub track on the big screen, You Make Me Feel Mighty Real. Everyone was encouraged to dance in the aisles and they did. En masse. No inhibitions. Not one person remained seated. And Madison was among us, jiving, laughing and sprinkling us with fabulousness.

Dr Madison Moore is a cultural critic, pop culture scholar, DJ, queer advocate and an academic at the Virginia Commonwealth University. He writes for various publications and academic journals about queerness, gender studies, fashion, sound, contemporary art and visual culture. Madison has also presented an inspiring TED talk: Communicating Brooklyn Style. For under all the sequins, Madison Moore is a serious person who loves veering from the polar opposites of frivolity to intellectual matters. With a few humorous asides in between.

In 2018 he published his first book, ‘Fabulous: The Rise of the Beautiful Eccentric.’ He theorized that fabulousness can become a radical aesthetic practice: a form of cultural criticism that empowers those who’ve been marginalised.

‘It’s about making a spectacle of oneself in a world that seeks to repress and undervalue fabulous people.’

Madison was raised in St Louis County, Missouri USA, before moving to New York. Among his black role models were Prince, Lenny Kravitz, Little Richard, Grace Jones and Josephine Baker. He spoke about Josephine Baker’s highly successful career in Paris. But despite having her name on the glittering awning out front, being a black woman she was expected to enter the theatre from the back entrance.

Raised by his grandmother, Madison was deeply impressed by his flamboyant Aunt Mildred who always dressed beautifully. The family would teasingly ask her, ‘Where are you going, Mildred?’

However, it wasn’t all frivolity and style, as young Madison was spending six to eight hours a day practising his violin in order to become a classical violinist.

Inspired by Prince’s opulent stage costumes, the adolescent Madison began dressing more flamboyantly. But he couldn’t understand why – when the local lads wanted to bully and denigrate him – they sneeringly called him ‘Prince’. Everybody in Madison’s family loved Prince, including his grandmother. So how could being likened to Prince be an insult?

In an interview, Madison stated that we all have a lot to unlearn. ‘It’s a collective process. We have to unlearn white-supremacy, unlearn misogyny, unlearn tran-misogyny and unlearn biases so we can get on with life and be who we are.’