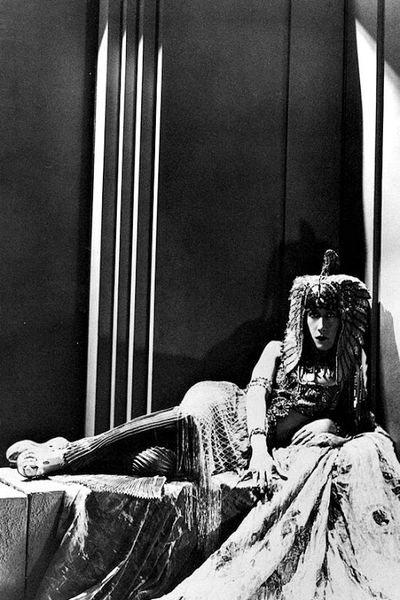 Born into Italian aristocracy in 1881 and heiress to a fortune made in cotton, Luisa Casati managed to run up personal debts of $25 million.  She and her sister had been orphaned when both parents died and Luisa was only fifteen years old.

The Marchesa Casati was a devotee of the Paris Ritz. Her nickname was ‘Medusa of the Grand Hotels.’

While living in Venice at the Palazzo Venier dei Leoni, she was often seen roaming the city in the middle of the night, dressed in nothing but a black velvet coat and mother-of-pearl high heels. She liked to create a sensation by walking her two cheetahs on jewel-encrusted leashes. Frequently she would be applauded by late night revelers.

Luisa Casati’s behaviour and lifestyle were outrageously hedonistic and she lived recklessly, giving little thought to either the future or the past.

The Marchesa became a muse to Jean Cocteau and Cecil Beaton. She modelled for photographers such as Man Ray and Baron Adolf de Meyer, and inspired many other artists, renegades and designers. All her life Luisa fought against convention and she was immortalized in photographs, art and print.

The Marchesa’s sartorial style was sensational and bizarre. She wore creations made by the avant-garde designer, Léon Bakst and declared, ‘I want to be a living work of art’. It was said by the Surrealists that the she succeeded brilliantly in her quest.

Jean Cocteau swore that the only time he ever saw Pablo Picasso astonished, was when they visited the Marchesa Casati’s palazzo, in Venice in 1917. Luisa was devoted to surrealism and infamous for her devotion to the black arts, the occult and spiritualism.

Cocteau liked to regale his friends with stories of the goings on at Luisa’s palazzo. Occult rites and aberrant pleasures were the basis of her unique hostessing style. Naked footmen, gilded with gold paint, tossed copper filings into the open fires. The filings flared blue-green in a hellish manner, while guests lounged around smoking copious quantities of opium.

Luisa’s six-foot frame was very lean and mostly sustained on gin and opium. Although not an acknowledged beauty, she was strikingly handsome. With her skin powdered white, her hair dyed a fiery red, her pupils darkened with Belladonna and black velvet false eyelashes, she did not go unnoticed.

The Marchesa had a menagerie of animals that included snakes, cheetahs and peacocks. At the Paris Ritz, her boa-constrictor was fed live rabbits by the maître d’hôtel, Olivier Dabescat. Olivier maintained the social fabric of the Ritz hotel and he knew everyone’s secrets including Marcel Proust’s.

Luisa’s rages were legendary and when she awoke at the Paris Ritz – late on the afternoon of August 4 1914 – she threw an epic tantrum. Why? Because nobody was around to make her breakfast. The staff had more immediate concerns for Germany had declared war on France, and the German army was marching to take possession of the ultimate European prize – Paris.

According to another Ritz guest, the sculptress Catherine Barjansky, ‘I found the Marchesa Casati screaming hysterically. Her red hair was wild. In her Bakst-Poiret dress she suddenly looked like an evil and helpless fury, as useless and lost to this new life as the little lady in wax. War had touched the roots of life. Art was no longer necessary.’ (The Hotel on Place Vendôme by Tilar J.Mazzeo).

When Luisa died, she was buried dressed in leopard skin and a thick pair of false eyelashes. In the coffin, at her feet, lay her beloved Pekingese. She’d had the dog professionally stuffed at the time of his death.

There are so many stories and myths about the Marchesa that she’s become increasingly more mysterious, exotic and unknowable as time passes. I wonder if maybe that’s exactly what she’d hoped for?

She died in poverty in London in 1957. Luisa Casati’s simple tombstone at Brompton Cemetery is inscribed with a quote from Shakespeare’s Antony and Cleopatra:

Age cannot wither her, nor custom stale her infinite variety.

Photograph above: Portrait of Marchesa Luisa Casati in Egyptian costume.