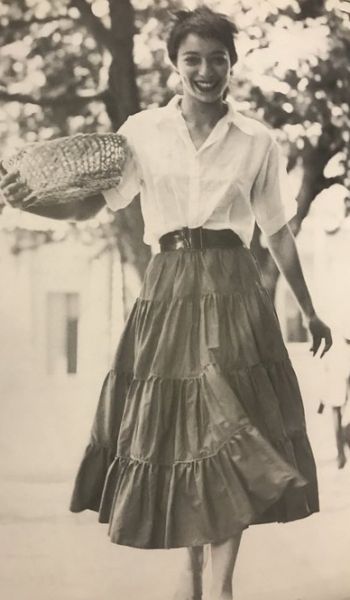 ‘Every time you show your work, you really show your soul.’   Mirka

I never met Mirka Mora, but she became one of my most favourite people. I only know Mirka through her paintings and her wonderful autobiography, Wicked but Virtuous; My Life.

Whenever I stop to look at Mirka’s murals – they can  be seen around Melbourne – the word joy comes to mind. And I wonder how it came to be that she escaped the darkness and terror of WW2 to spend a lifetime providing joy, humour, wit and wisdom to those around her.

Mirka lived an amazing life for 90 years. Having narrowly avoided being sent to Auschwitz as a child during the Second World War, she then married a French Resistance fighter, Georges Mora, and emigrated to Melbourne. The city was staid and something of a provincial backwater in 1951. And the Moras were among the first to give it a taste of European cuisine and French bohemian style.

Mirka and Georges established a European style café-restaurant that soon became the place for intellectuals, writers, creatives, dancers and politicians. And although many of them were unknown at the time, they later became famous.

Mirka’s unconventional autobiography, Wicked but Virtuous, is never dull and frequently humorous. She lived life to the full and she wrote about those around her with insight and compassion. She was not afraid to talk about the extreme lows in her life, and the reader gains an insight into her life in bohemian circles. Mirka’s autobiography also provides a window into the way an artist works and the way life itself can feed and fuel an artist’s work.

Georges became an art dealer and he and Mirka were central to the establishment of the Museum of Modern Art at Heide. The Moras also established the Mirka Café in 1954, Café Balzac in 1957 and Tolarno Bistro in 1965. Mirka created her drawings and paintings and then went on to create murals, mosaics, dolls, and fabric designs for fashionable clothing.

Mirka’s wit and sense of fun never dimmed. Her lingerie provided her with a prop when she wanted to be risqué and shock people a little. Occasionally when things were a tad dull she would flash her knickers or considerably more. And she had been known on occasion to rip off her bra when farewelling guests and wave it in the air like a flag. She loved making others laugh and being the centre of attention. Her irreverence and humour extended to planting her face in birthday cakes just for the hell of it. Children were just as delighted with Mirka as she was with them. They understood each other.

Mirka was the child of a French Resistance fighter and her early life was fraught with danger. She narrowly managed to escape being sent to Auschwitz at the age of thirteen. On the cattle truck that transported Mirka, her mother and two sisters, she quickly jotted down the names of the stations as they went past. Mirka then stuffed the paper into an unstamped envelope, addressed it to her father and shoved it through a crack.

Fortunately a stranger found the letter and posted it to her father, Leon Zelik, who tracked them down. Zelik persuaded the Nazi authorities to release his family because his wife was a required worker in the making of Nazi uniforms. Not true but it worked.

Mirka acknowledged that the wide, sad eyes of the doomed children in the Nazi camp morphed into the angel children she painted all her life. And she never stopped being grateful to the anonymous person who had stamped and posted her letter. The kindness of strangers.

The Moras story has also been told in Philippe Mora’s documentary film, Monsieur Mayonnaise. Apparently, Georges Mora and Marcel Marceau disguised themselves as nuns in order to smuggle Jewish children over the border. Cunningly they slathered mayonnaise all over their secret documents, so that Nazi officials wouldn’t touch them – in case they got their gloves dirty.

At Mirka’s memorial, Carrillo Gantner narrated that after Mirka told him how she escaped being sent to Auschwitz, she burst into raucous laughter. They were in a quiet public art gallery and Mirka’s laughter seemed incongruous, but he understood it when she said quietly,

‘I am laughing at death. What else can we do?’

And it was with this spirit that she lived her life. At her memorial, those who knew Mirka, affirmed that she was a joyful spirit with an abundance of joie de vivre, a child-like curiosity, and a sense of wonder. And that her concerns always involved the arts, fine cuisine, family, friends and above all compassion and love.

Photograph: Mirka Mora, early days in Melbourne. At one point the Moras lived at the top end of Collins Street, it was known locally as The Paris end.