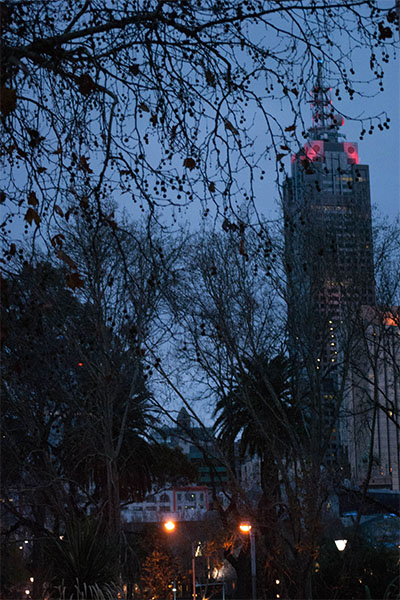 It’s still dark but we’re all off to work. St Kilda road is gloomy but the tram is now trundling past the National Gallery and the bare trees are festive with colored lights. City buildings are silhouetted against a sky that is slowly lightening. The tram is past its prime and the brakes are a bit dodgy. Dripping umbrellas, sodden passengers, windows that won’t open and heating that knocks you out. As one elderly gent put it, ‘You could grow orchids on them trams they’re so bloody hot.’

There’s a rolling beer bottle and some slimy substance underfoot that you really don’t want to investigate too closely.

Sometimes it’s better not to know.

Then there’s the sinister bloke dressed all in black who has placed his banana on the empty seat next to him and leaves it there, even when the tram fills up and people have to stand. He’s pasty faced and seems to be a tad sweaty and more than a little twitchy.

There’s not a punter present who wants to challenge his pin-pricked eyeballs by asking him to remove his banana. Nobody knows what their fellow man is on and bad things can happen if you happen to rub a stranger up the wrong way.

People get on and off. There a bit of a hold up when a mother gets her mega pram jammed in the doorway. Her kid wails as four blokes wrestle with the hardware and try to lever the pram over the metal railings on the tram steps. She’s finally on and we’re off again.

The pram is now barricading a bunch of business folk right up against the windows that are dripping with sweaty condensation. The mother thanks everyone and looks shamefaced. I feel sorry for her, she seems close to tears. Maybe the pram is the least of her problems? The kid keeps wailing.

Finally we reach Swanston Street and the end is in sight. Thank God. That is until an impatient driver accelerates through a red light, collides with another car and shuts down every tram going either up or down Swanston Street. Nobody is hurt but the tram tracks are out of action whilst the police arrive, bring in the tow trucks and redirect the peak hour traffic.

The punters are cursing and snarling, our driver resigned. Everyone reaches for their phone to tell their bosses they’re late. Again.

Photograph (above) of Swanston Street Melbourne at sunrise by Lesley Truffle.