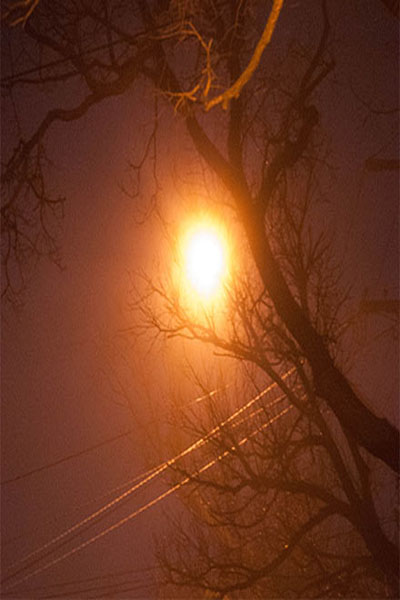 The tram lurches away from the tram stop at the top end of Swanston Street. We can hear the aircon but can’t feel it. All the windows are hermetically sealed. When the doors whisper open a blast of hot northerly wind enters and stirs up the city aroma of petrol fumes, stale perfumes, body odour and the unmistakable smell of Macca’s beef burger. Quite a few nostrils are twitching suspiciously. A fellow commuter must have a burger and fries secreted somewhere on their person.

The tram driver is a maniac. He approaches each stop like a Formula One driver and then chucks on the brakes as we’re about to overshoot the stop. Most of us are straphanging, clutching at railings and staggering all over the joint. I lurch sideways and stomp on a businessman’s toes with my stilettos. Oh God. He smiles grimly but is very nice about it. We all sweat some more.

Communication is zero as most commuters are clamped to a mobile device of some sort. Others create distance with headphones pumped up to maximum volume.  An international student straphangs as he leans down to whisper sweet nothings into his girlfriend’s ear. She giggles and squirms in her seat. They like each other.

The tram lurches to a sudden halt near the Vic Market. Only a few folk get off. An old lady tries to clamber on with dodgy knees and an overladen trolley of fresh produce.  Quick as a flash, the international student fights his way to the door, lifts up the shopping trolley and steers the oldster towards his girlfriend’s seat.

The girlfriend helps her sit down while the student ensures the tomatoes don’t topple and the celery doesn’t escape. Order is restored and the old lady rests her swollen ankles and looks chuffed. Strangers smile sideways at each other. A deep appreciation for random kindness and old school manners.

A young bloke bursts into the tram, narrowly missing getting crushed in the closing doors. He smirks at the sweaty commuters. Country boy’s grin and hipster’s wardrobe. He shoves a shock of blonde hair out of his eyes as he scans the passengers. The tram takes off but he makes no attempt to get a grip on the furniture. He’s determinedly free range. The cowboy’s Cuban-heeled boots clatter as he staggers sideways – going in the direction of a stylish girl who’s straphanging. She clutches her design folder to her breasts as he narrowly avoids knocking her over.

The fox is in the henhouse. The cowboy grins at her and she smiles back nervously. He admires the style of her summer frock. She tells him she made it herself. He’s all approval. Her smile broadens and she relaxes a little. He edges in a tad closer. The old lady perks up and even dour businessmen glance up from their smart phones. Two gamesters tear their sweaty eyeballs away from their shared laptop and gawp.

Bad luck. The girl gets off at the next stop, shooting the cowboy a look of intense regret over her shoulder. She’s gone. There’s a stampede of commuters struggling to get in the door. A young woman gets on: serious city dressing, sensible shoes and no-nonsense attaché case. Most blokes wouldn’t risk it but the cowboy knows his market. With a theatrical stagger to the right, he lurches into her proximity. She coolly looks him up and down when he speaks to her. Her fierce look clearly states – Take care, I ate the last jerk who tried this on. I don’t like our man’s chances but he’s clearly up for the challenge.

We can’t hear what’s the cowboy’s saying because the spluttering announcements are killing our fun. He’s all deference and courtly manners.  She loosens up and permits him a wry smile. He morphs into a gentleman paying court to a smart woman. She doesn’t seem to buy it but she’s clearly putting him go through his paces. The old lady leans forward, sharp black eyes gleaming with delight. Just about everyone is slyly eavesdropping. The cowboy’s making great progress but time is not on his side.

The tram driver guns the tram past the Melbourne Town Hall as though pursued by demons. Then he chucks on the brakes just as we’re about to overshoot the Flinders Street Station stop. The doors hiss open and there’s another cattle call to get off. The cowboy is the last to leave, narrowly missing getting crushed in the closing doors.

Everyone regretfully watches him go, insolence in his ship’s deck swagger. He disappears into the crowd and vanishes. The old lady sits back in her seat and sighs heavily.

The cabaret is over and it’s too bloody hot.

Photograph above taken by Lesley Truffle.