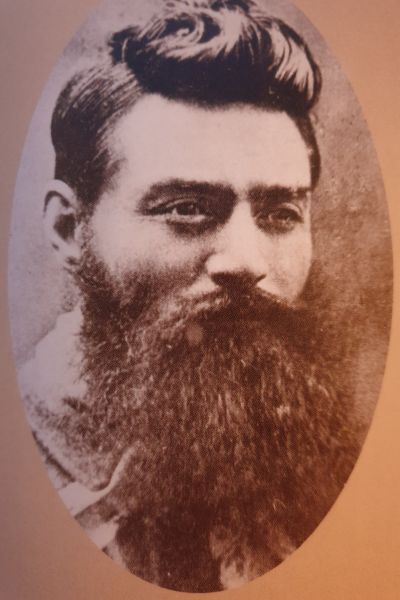 ‘Don’t be frightened. Nothing will happen to you. I have a mother of my own.’

Ned Kelly to Anne Calvert while robbing the National Bank at Euroa.

On November 11 1880, Edward ‘Ned’ Kelly was hanged for murder at Melbourne Goal. A reporter at the time claimed that Mrs Ellen Kelly’s final words to her boy were, ‘Mind that you die like a Kelly, son.’

I’ve just finished Grantlee Kieza’s book, Mrs Kelly and the picture he draws of Ned Kelly, his mother and the Kelly clan is a fascinating read. The Kellys were enemies of the law and Ned developed an obsessive hatred for the police.

Ned was raised on true stories of downtrodden Irish Catholics being burnt out of their homes in Ireland, police brutalization and the extreme cruelties of exploitative English landlords. By 14 Ned was doing armed robberies, at 20 leading a crime gang, and at 25 he was executed as an outlaw.

Ellen ‘Little Nell’ Quinn was born in Ireland. She had twelve children in Australia and seven of them died in her lifetime. Her first husband ‘Red’ Kelly dies an alcoholic, her next lover Bill Frost abandons her while pregnant and her second husband, George King – a Californian horse thief – beats her before leaving her in the lurch. King wasn’t much older than Ned but on her marriage certificate Ellen put her age as 36 instead of 42.

Then just when Mrs Ellen Kelly thought things might improve, ‘Mad’ James Kelly turns up drunk one night and burns her small wooden home to the ground. She’d been living there with her two sisters and up to seventeen children.

Ellen was incarcerated in the same jail as Ned Kelly at the time he was hung. Having wounded a policeman with a shovel, she’d been sentenced to three years with hard labour. It’s been noted by criminal lawyers past and present that Ellen’s punishment was cruel and unjust.

Ellen’s baby, Alice King, spent the first year of her life in the slammer with her mother. She was then removed leaving Ellen bereft in jail. Local police harassed and mistreated Ellen’s other children who remained in their mother’s shanty and were raised by relatives.

Disappointments, disasters and injustices just kept piling up but Ellen toughed it out and died at ninety-five. Proud that her youngest son Jack Kelly, a master horseman and rodeo rider, had joined the Western Australia police force.

Ellen’s first born son, Ned Kelly,  has always been a divisive figure in Australian history. His admirers view him not as an outlaw who had a price on his head but a magnetic Robin Hood character who was hounded by police and lawmakers.

Ned Kelly possessed charisma, audacity and charm. Several of his female hostages flirted openly with him, including the wife of bank manager Robert Scott, whose bank had just been robbed by Ned. When taken hostage by Ned and his gang, Mrs Susie Scott swiftly changed into French muslin, lace, ribbons and white gloves.

A photograph of Ned was taken on the day before his execution (above). He had a rare medical condition which meant his eyes changed from hazel to a strange glowing red when he became angry or excited. His black curly hair and eyebrows were in contrast to his reddish beard.

Being a tall man, Kelly was terrifying when clad in his armour and ten kilogram iron helmet. During his last stand, his helmet provided the illusion of a grotesque apparition approaching through the morning mist. Under his amour he wore the bravery sash that he’d been awarded at eleven for saving a boy from drowning.

Initially the police bullets  bounced off the metal. Ned kept moving even though he was in horrific pain from multiple wounds. His legs were not protected and when bullets tore into his hip and thigh he finally collapsed. The police carted him off barely alive.

Ned Kelly’s life as an infamous outlaw gave rise to a well-known Australian idiom –  As game as Ned Kelly.

Photo: 1880 Charles Nettleton’s photograph of Ned Kelly at Melbourne Goal, the day before his execution.