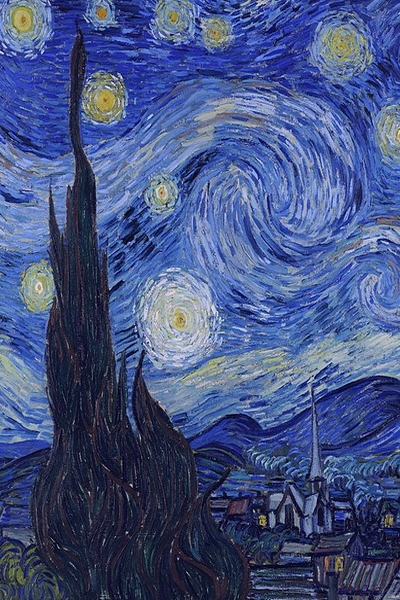 When Vincent van Gogh committed suicide in July 1890, aged 37, he’d only been painting for about a decade. He was immensely productive, despite suffering acute nervous attacks and paralysing depression. Vincent willingly spent money on art materials but he ate poorly and had lost most of his teeth by the time he was thirty.

Van Gogh was supported financially and emotionally by his devoted younger brother, Theo. In one of his many letters to his brother, Vincent wrote,

‘It is true that I am often in the greatest of misery, but still there is within me a calm, pure harmony and music.’

He lived in a small rented room, above a cafe in Auvers-sur-Oise, north of Paris. At the time of his death, Vincent was under the care of Dr Gachet, a passionate art lover and amateur painter.

When the movie Loving Vincent opens, van Gogh has already been dead a year. The story is narrated by Armand Roulin, the postman’s son from Arles, who is tasked with delivering a letter written by van Gogh. Armand’s father, Joseph Roulin, cared deeply about Vincent as did many other folk. Despite this Vincent sold only one painting in his lifetime. However, since then his genius and influence on modern art has been widely acknowledged and his work highly esteemed.

Loving Vincent is an unusual movie but despite having won prestigious awards, reviews have been mixed. I found the film visually stunning and very moving but I was a bit disappointed that some of the French characters spoke with pronounced Cockney accents.

But I figure you either surrender – and let Loving Vincent sweep you into van Gogh’s astonishing world – or you resist and miss out on a wonderful experience. I don’t think it’s possible to be half-assed about such a unique and beautifully crafted movie.

Loving Vincent runs for about 90 minutes and it’s composed of animated paintings created by 125 professional oil-painters. There are two distinct styles – black and white flashbacks interspersed with coloured animated versions of the actors. These scenes are painted in van Gogh’s distinctive style utilizing thick brush strokes and textured oil paint.

The co-writers/directors – Dorota Kobiela & Hugh Welchman managed to stayed true to Vincent’s statement, ‘We cannot speak other than by our paintings’.

I was intrigued by the professional artists who arduously painted all 65,000 film frames by hand. How the hell did they do it? Apparently the painters had a monitor set up at eye level with their canvas below, and they then painted each scene by reimagining it into van Gogh’s distinctive style.

The film took ten years to make and there were many setbacks and difficulties along the way. But this hasn’t deterred  Welchman and Kobiela from planning a painted horror film, based on Francisco de Goya’s extraordinary paintings. It’s a daring idea and I hope it happens soon.

Vincent wrote, “But the sight of the stars always makes me dream. Why, I say to myself, should the spots of light in the firmament be less accessible to us than the black spots on the map of France? Just as we take the train to go to Tarascon or Rouen, we take death to go to a star.”