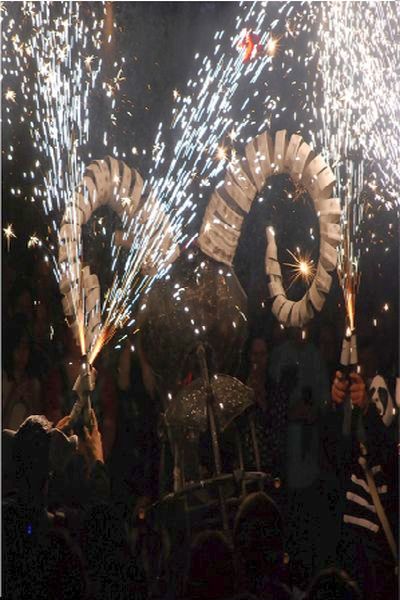 The Devil’s soldier drummers are increasing the beats. Their faces sinister with heavy black brows, masks of white makeup and strange white horns. We’re all hoping something wicked is coming our way.

The Devil is now amongst us. He towers over everyone in his huge headdress of ram’s horns, beaked snout and flaming slashed eyes. When the drumming reaches a crescendo, fire spurts from the drummers’ shoulders. The antithesis of angels’ wings.  Memories of illegal backyard fireworks. Our childish glee at the increasing chaos.  Unleashing the secret pyromaniac in my soul as the crowd whoops and hollers.

The crowd in Federation Square has gone nuts. We are egging the Devil on to do his worst and many folk fall into line and follow the cavorting, dancing theatre troupe up into the dark alleys behind Flinders Street. It’s not every day you get to dance with the Devil.

There is however a dark history behind Correfoc (run with the fire). Starting back in the 17th Century – in Spain’s village of Zugarramurdi – there have been commemorations and celebrations for the thousands arrested and those who were burnt to death by The Inquisition for supposedly being witches.

Twenty years ago Oscar Castano ‘Garbitxu’ and Cesar Arroyo founded the Basque theatre company Deabru Beltzak – which translates as black devil. They began performing at the yearly pagan festival at Zugarramurdi and have been staging performances around the world ever since.

Les Tambours de Feu is brilliant. Catch it if you can.