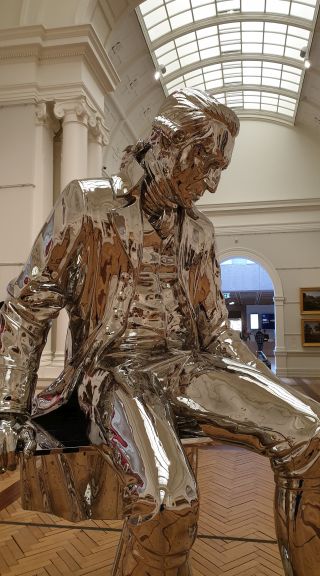 Recently I visited the Art Gallery of New South Wales, to loiter in the 19th Century European collection. There are many luscious paintings – including some massive heroic oil paintings – and a few sculptures of the era.

Sitting plum in the middle of these works was a massive, glittering, stainless steel sculpture The English Channel. It’s a 2015 sculpture by New Zealand artist Michael Parekowhai (photo above). At first I thought it might be Mozart or another musician but it’s actually British explorer Captain James Cook.

James Cook sits on an artist’s bench, reflective and pensive. It’s not a heroic representation, his feet dangle and his gaze is downcast.  Much has been made of Cook’s vile temper and his brutal reactions to incidents involving indigenous populations. When viewing the piece I thought about the British colonization of Australia and Cook’s involvement.

At the same time I was distracted. Cook dominates the surrounding work just by his sheer size. He’s just so damned big and gleaming, reflecting back those who gaze upon him.

The NSW gallery assumes that their clientele understand they can look but not touch. James Cook has some black tape on the floor showing where you can stand and ogle. A grandmother was encouraging her grandson to touch the work. The child was eager to climb the piece and he grabbed hold of Cook’s muscular leg and his buckled shoe.

What happened next was electric and comedic. The gallery attendant rushed over making cease-and-desist noises but grandma didn’t pay any attention to him. She was busy. By the time order was restored, every visitor in the joint was transfixed. Everyone notices big and shiny. You can’t help it.

Many tourist locations worldwide have Big Things on display for tourists. There are big pineapples, monstrous hot dogs, humongous sharks, mountainous Buddhas and giant bananas. But until Jeff Koons came along the moneyed classes tended to look down their noses at the big-is-better school of art appreciation.

American Pop artist Jeff Koons rose to prominence in the 1980’s. He stated he wanted to ‘communicate with the masses’  utilizing entertainment, advertising and marketing visuals.

His early work featured porcelain ornaments – that Koons did not create – which he then paid artisans to copy and pump up to BIG. Koons also suspended basket balls in aquariums and exhibited photographs of himself coupling with his former wife, La Cicciolina (Ilona Staller).

Koons firmly believes that big is better. In 2013 his massive orange steel sculpture, Balloon Dog sold for a huge $58.4 million.

Whereas Koons has always been eager to intellectualize his art practice, Parekowhai tends towards silence and lets the work speak for itself.

Parekowhai is of Maori and Pakeha (European) descent. His sculpture of James Cook featured in an earlier work, The Lighthouse. It was ambiguous, open to interpretation and created quite a stir when first exhibited. Art critics fell over themselves trying to explain it.

But as Parekowhai said of his James Cook, ‘maybe he’s trying to figure out what to do next.’