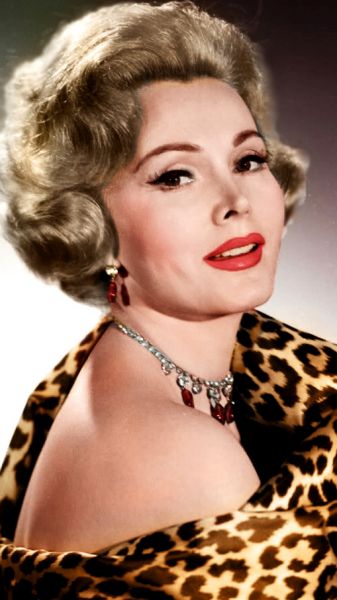 ‘A man in love is incomplete until he has married. Then he’s finished.’

In the fifties and sixties, Zsa Zsa Gabor became more famous for playing herself than the films, stage shows and television shows she appeared in.

Born in Budapest and educated at a Swiss finishing school, she set about monetizing her many charms in 1941 when she emigrated to America. Sári Gábor took on the name Zsa Zsa – probably from a character she played in an early film.

It’s hard to describe the phenomenon of the three glamorous Gabor girls and their ubiquitous mother. They burst onto the society pages and into the gossip columns so suddenly, and with such force, it was as if they’d been dropped out of the sky.

In an era blessedly devoid of social media, Zsa Zsa cunningly managed to stay in the public eye. She was regularly photographed at Hollywood social events and sought photo opportunities whenever possible. Journalists and photographers adored her – she always gave them sexy and savvy material to work with. Hell, the woman was witty and unashamedly herself.

Subsequently Gabor became known to the public as a woman who had a weakness for the institution of marriage and a taste for rich men bearing diamond gifts.

Her high visibility meant she came to the attention of rich men such as Conrad Hilton. He was 30 years older than Gabor ,who was 25 when he married her. Unfortunately despite his phenomenal wealth Conrad turned out to be a miser who treated her badly.

‘I soon discovered that my marriage to Conrad meant the end of my freedom. My own needs were completely ignored: I belonged to Conrad’.

Unfortunately over the course of nine marriages Gabor didn’t always choose wisely. Most unions were short lived and her marriage to actor Felipe de Alba, was annulled one day after the wedding. It came out that she was already married. No matter.  Zsa Zsa looked fabulous in the photographs that immediately appeared in the press.

Her film credits included the bizarre Queen of Outer Space in1958, Moulin Rouge in 1951 and a modest part as a nightclub manager in Orson Welles classic film, Touch of Evil 1959.

Gabor also became popular on television talk and game shows as well as Gilligan’s Island, Bonanza, and Batman. She appeared in Bob Hope TV specials and flirted with David Letterman.

But what singled Zsa Zsa out from other blonde Hollywood beauties was she developed a cutting wit and excellent comic timing.

Unfortunately in her later years Zsa Zsa had a couple of serious car accidents. She also became embroiled in expensive legal matters and made several unwise financial investments.

Gabor’s last husband, Frédéric Prinz von Anhalt – born Hans Robert Lichtenberg – was 26 years younger. As an adult he’d paid to be ‘adopted’ by Princess Marie-Auguste von Anhalt so he could obtain a title.

Anhalt insisted Gabo knew his real identity and found his theatrics entertaining. He stayed with Zsa Zsa to the end of her life at 99, despite not being entirely faithful to her.

But as she’d already coolly noted,

‘Husbands are like fires. They go out when unattended.’