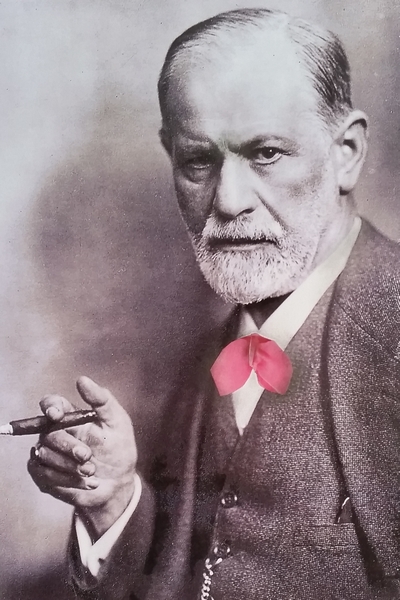 Freud was a heavy cigar smoker and supposedly said, ‘Sometimes a cigar is just a cigar’. Many of his theories relate to uncontrolled libido and wild sexual impulses. Accordingly, his statement probably means a phallic-shaped object such as a cigar, doesn’t necessarily have to have any subtext. It just is.

In my novel The Scandalous Life Of Sasha Torte, Sasha is introduced to the famous Austrian neurologist Dr Sigmund Freud, at The Café Sperl in Vienna. Sasha Torte – world famous Tasmanian pastry chef – is very taken with the Vienna’s flamboyant ornate architecture. ‘It has much in common with grandiose wedding cakes.’

Café Sperl is a traditional Viennese cafe located at Gumpendorfer Strasse. Established in 1880, and located near theatres & opera houses, it attracted many Viennese creatives as well as military men.

Much has been written about Freud. He’s been accused of everything from being an unrepentant womanizer and misogynist to fictionalizing his research – but there is no denying the fact that Freud continues to fascinate.

A measure of his fascination is that for several decades, stand-up comedians have utilized Freud’s theories to riff on the chaotic state of the human mind. And Freud’s Oedipus Complex theory, Dream Analysis and Wish Fulfillment have provided endless fodder for literature, film and the fine arts.

In high school I developed an unhealthy interest in Freud’s theories about the divided self. Put very simply, Freud’s theory is that we all have an Id (instincts, primitive wants and desires – your wild child), Ego (reality, tries to juggle logic and reason – your grown-up self) and Superego (morality, philosophical and morals – your quest for perfection).

I found it soothing to think that my problems might be due to the fight going on inside me between my Id, Ego and Superego. It also helped explain what the hell was going down with the derailed adults around me. But fortunately I later decided there were many other strange factors contributing to divorce, adultery, domestic violence, dedication to hard liquor and wild boar hunting.

While studying Psychology at university I developed an interest in Freud’s clinical work; treating patients through psychoanalysis to ease anxiety and depression rather than resorting to radical medical intervention. Psychoanalysis was revolutionary in the late 1800’s when many ‘hysterical ’ women were being coerced into having surgery on their genitals to ‘normalize ‘  their emotional state.

Dr Freud also developed therapeutic techniques such as free association; His patients would talk about what was topmost in their minds and allow Freud to analyze what it all meant. He was big on subtext and hidden meanings.

Despite his intense seriousness Freud was an interesting and complex man. He not only fathered six children within eight years to his wife, Martha Freud, but he dabbled in cocaine and fought bitterly with his friend and colleague, Carl Jung.

Bizarre photographs exist of the two men bonding on a rather gloomy expedition to the Arctic and an African big game hunting safari. Jung looks dismayed posing for the camera with Freud, lethal weapons and their big game booty.

Freud openly supported the use of cocaine as a tool for exploring the human psyche. At the time cocaine was expensive but freely available from pharmacies as erythroxyline. And it was quite the done thing for clinical researchers to experiment on themselves.

Cocaine may have influenced Freud’s work The Interpretation of Dreams; for Freud believed dreams were, ‘the royal road to the unconscious’. In 1884 he wrote a paper on the merits and joys of cocaine titled, Über Coca. He wrote it as ‘a song of praise’ and described his first experience with Cocaine as, ‘the most gorgeous excitement’.

But like most things relating to Freud, there is still no real agreement. Was Freud a raving coke fiend hell bent on destroying his nasal passages? Or was he simply a dedicated and intrepid researcher?