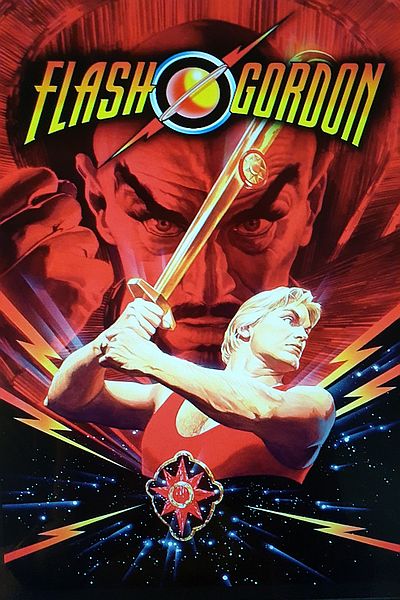 ‘Flash, Flash, I love you, but we only have fourteen hours to save the Earth!’

Ming the Merciless from the planet Mongo, has a delightfully wicked line in evil patter – ‘Pathetic Earthlings … Who can save you now? ’ Played by Max von Sydow, Ming is phenomenally sinister with a villain’s cackle that resonates.

Actor Sam J. Jones is Flash Gordon the New York Jets quarterback. Easy on the eye and agreeably muscular, Jones became an actor after gainful employment in the US Marine Corps and playing semi-professional American football.

His football training came in handy when there’s an impromptu football game – an entire team of Ming’s thugs against Flash Gordon. Ming murmurs to one of his henchmen, ‘Klytus! Are your men on the right pills? Maybe you should execute their trainer!’

I won’t reveal more as it might be a spoiler if you haven’t seen the film.

Adapted from Alex Raymond’s comics the filming of Flash Gordon had a rocky start and finish. The producer, Dino De Laurentiis tried to engage Fellini and then George Lucas to direct but neither were up for it.

Driving the momentum of the film is a powerful musical score by Queen, incorporating orchestral sections by Howard Blake. Freddy Mercury’s thumping anthem to Flash Gordon – Saviour of the Universe and King of the Impossible – not only sets the tone but maintains the momentum.

The innovative musician had a passion for opera and Mercury fused operatic elements with hard core rock. Using synthesizers and rapid fire guitar work, Queen created a mix of rock and progressive electronica, which suited the fast paced movie. The film’s soundtrack to Flash Gordon was Queen’s ninth studio album and their first soundtrack album.

In 1980 the film was released and many critics were scathing but overall the reviews were positive. The movie did exceptionally well in Italy and the UK. Since then Flash Gordon has gone on to become a cult movie and has been referenced by filmmakers, designers and musicians.

Flash Gordon is one of my favourite films. Admittedly the acting is sometimes uneven but there are so many things to love. Including the comedic pronunciation of the word ‘Earth ’. When pronounced snidely – in the plummy British tones of arch villain Klytus – our  planet comes off as being comparable to a giant turd.

In 2020 – the year many of us would like to forget – Ming’s ticking off of we Earthlings has resonance:

‘Pathetic earthlings. Hurling your bodies out into the void, without the slightest inkling of who or what is out here. If you had known anything about the true nature of the universe, anything at all, you would’ve hidden from it in terror.’