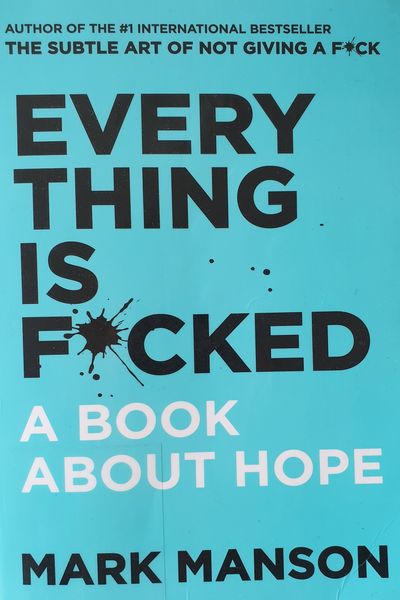 ‘Look, it may be that you came to this book looking for some sort of hope … I am sorry. I don’t have that kind of answer for you. Nobody does.’

Mark Manson, Everything is F*cked A Book About Hope

Mark Manson’s first self-published book in 2011 was titled, Models: Attract Women Through Honesty. The book is essentially a practical self-help book for men seeking a partner. Having begun as a pick-up artist blogging about his experiences with over 100 women, Manson gravitated towards self-help for hapless males.  He provided advice as to how they could connect with women without resorting to faking and lying. Manson became a life coach for males who needed guidance on how to behave in a sincere manner in order to attract women.

Despite its screaming orange cover and witty title, Mark Manson’s 2016 book titled The Subtle Art Not Giving a Fuck, was essentially about old school values fused with traditional Buddhist concepts. How the two fused together came down to the author’s humorous take on what constitutes a life well lived.

Manson often references Buddhist concepts including the acceptance of suffering and non-attachment. And perceives our daily lives as being pedestrian, tedious, painful and dispiriting.

In his 2016 book, Manson stated that how contented we are with our lives, is directly related to the metrics/values we choose to base our actions on. So, if for example we place high value on things like pleasure, material success, always being right and staying positive – in order to deny our negative emotions – then we are quite likely to end up being thoroughly miserable.

In his follow up book published in 2019, Everything is Fucked A Book About Hope, he continues with the colloquialisms and emphasis on ‘dude’ culture. All readers are guys and dudes whether they are or not.

Manson goes further and firmly states that we all need to stop stressing out about the state of the planet. Things are better than we think – we are just incapable of seeing how good things are. As with his other books Manson is concerned primarily with the self. So he swiftly glides over significant issues such as climate change and the man-made, irreversible damage that has already occurred on our planet.

But when Manson states that our lives are significantly and infinitely better than we think they are, my guess is that he’s not really giving too much thought to those who’ve been shoved backwards out of society. America’s Commander-in-Chief is not taken seriously by Manson. Nor are Trump’s highly questionable, divisive, dangerous, sexist and racist actions.

As Manson noted on his blog, ‘Trump isn’t that evil. He’s a bumbling narcissist who thinks life is one never-ending competition for TV ratings.’

Manson has an exceptionally loyal audience. But you only have to take a quick glance at the daily news to know that there are millions of people on the planet who have no choice but to give a fuck. And they have to give a fuck every single moment of their lives. These folk include several million refugees, those enduring extreme climate change,  and those who don’t have food or water.

At no point can it be stated that for these people that their lives are better than they think they are. Manson can afford to write off The Donald and other politicians of similar bent, simply because as a white, uber successful, self-help guru he isn’t directly being targeted for his class, skin colour, sexual preferences, low status or acute poverty.

Manson’s concerns are primarily those of a privileged white male who has reached the ‘pinnacle of success’ as valued by social media. He’s pretty much untouchable. Not all wealthy folk think like Manson. Many of them are generous philanthropists. And no doubt they too are kept awake at night worrying about the political state of the world and the destruction of planet earth. They most decidedly do give a fuck.

In a recent interview, Elon Musk – technology entrepreneur, Space X CEO, investor, and engineer – was asked what were the three things that bothered him the most. He came up with climate change, associated ecological concerns and after a long pause, quietly added that  – he hoped the computers would be kind.

Abraham Maslow way back in 1943 published, ‘A Theory of Human Motivation’ about how individuals most basic needs have be met before they can become motivated to achieve higher needs. These higher needs included esteem, love/belonging and self-actualization. In other words, if you don’t have basics like food, water and a roof over your head it’s highly unlikely you are going to be interested in reaching the higher levels of self-actualization.

Manson is all about self-actualization. But if your house has burnt down, your children are going hungry, you live in a war zone, you’ve been brutalized, psychologically tortured, kicked out of society and your future is nothing but a deep void, then the last thing on your mind is going to be self-actualization.

For a hell of a lot of folk, life is a serious, treacherous and possibly deadly business.

And they simply can’t afford not to give a fuck.

Photograph: Book cover, Everything is F*cked A Book About Hope  By Mark Manson. Published by Harper Collins 2019.