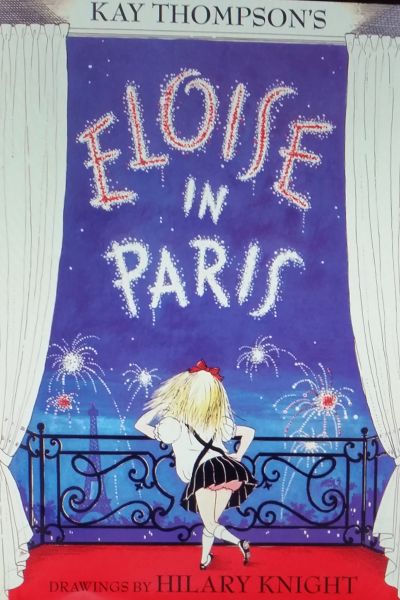 Eloise and I go way back. At about seven I discovered six-year-old Eloise. She was parent-free, running amuck in the Plaza New York with her nanny, a pug and a turtle.

I didn’t find it strange that Eloise exercised with champagne bottles, as my sister and I had hidden a bottle of Sicilian Marsala under my bed. It was delectable topped with cream. And after indulging in a couple of Marsala and cream night caps, we slept very soundly.

When in Paris, Eloise insisted that if ‘ You cawn’t, cawn’t, cawn’t get a good cup of tea ’, you simply must devour a peach languishing in champagne. I was smitten.

The Eloise books were not intended for children. The first book was published in 1955 under the title, Eloise: A Book for Precocious Grown-ups. Later this was re titled simply as, Eloise. Kay Thompson’s series, brilliantly illustrated by Hilary Knight, is still in print.

Kay Thompson, was a habitué of the Plaza Hotel and it’s famous Persian Room. She was a professional singer, vocal arranger, composer, musician, dancer and actress. When asked on whom Eloise was based upon, she answered simply, ‘I am Eloise ’.

Kate Thompson was a true eccentric, a bold woman who defied social conventions and refused to mold herself into yet another Hollywood starlet. After being rejected yet again by MGM, she quit and went on to become the highest-paid cabaret performer of the time.

Filmmaker Sam Irvin observed, ‘Her nightclub act pulled in huge money — she was the first person to crack the million-dollar ceiling performing cabaret. Her grand success even led to a new fashion trend.’

‘She just was everywhere, she was chic and new and different. She wrote the material; she designed the wardrobe that she wore, which was slacks. You know, most restaurants back then had dress codes, and she’d show up and try to defy the code and get in. Some places she didn’t get in, but she’d make headlines with it …’

Irwin also revealed. ‘Kay actually had a childhood imaginary friend named Eloise, and she spoke in this voice of Eloise all through her life.’

I have an original 1958 copy of Eloise in Paris. Published by Max Reinhardt, it retailed for the princely sum of twelve shillings and sixpence. On the back cover, there are comments from celebrities of the era.

Most of the time, Eloise lives in luxury at the Plaza Hotel New York, at a time when the hotel was considered the height of elegance. It became the social hub for fashionable and wealthy folk. Many artists and creatives also hung out in the Plaza Hotel’s bar and restaurants.

What is it that makes Eloise so damn appealing? For me it was the fact that Eloise is essentially motherless, she lives in an adult world, doesn’t attend boring schools and gets away with absolutely everything.

Eloise has a nanny to take care of her. Nanny loves a tipple of champagne, luxury travel and adventures. On their trip to France, Eloise’s observations of French society are astute and wickedly funny. And Hilary Knight’s marvellous pen and wash drawings capture the curiosity and delight that Eloise brings to the adult world.

Then of course there is Koki – her mother’s lawyer’s chauffeur – who lives in Paris. A telegram, from Eloise’s mother to Nanny, reads –‘ Koki at your disposal, let Eloise do anything within reason.’

Koki knows all the great places to go and he takes Nanny and Eloise on a picnic to the Bois de Boulogne. While Nanny drinks wine and recklessly plays with a flick knife, Koki plays guitar and Eloise dances wildly. Bliss.

‘French sandwiches are abolements large and we had to put all these flags on them so we could tell which one was anchovy and which one was concombres which is cucumber.’

No wonder that when I was a child I didn’t just adore Eloise, I wanted to be her.

Photograph: Cover of ‘Eloise in Paris’ by Kay Thompson, illustrated by Hilary Knight.