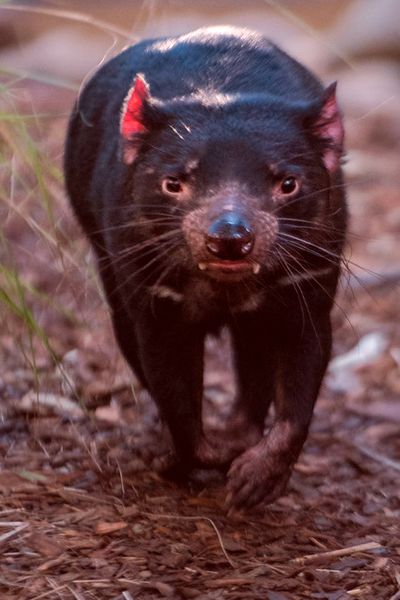 The Tasmanian Devil knows how to rub its enemies up the wrong way. When confronted by transgressors, devils have been observed to yawn. A big wide yawn exposing all its sharp teeth and strong muscular jaws. They’re strictly carnivorous and go for snakes, birds, fish, insects and carrion.

Tasmania is the only place where Tasmanian Devils can now be found in the wild. In the past they were prevalent all over Australia. Devils are about the size of small dog and weigh about 9-26 pounds. They can climb trees, swim rivers and move surprisingly quickly when pursued. The devils are muscular and their temperament is decidedly grumpy.

Devils descend into maniacal behaviour when threatened, competing for a mate or even when protecting their kill. They have a pungent body stench when stressed and their screeching is loud and fearsome. It was Australia’s colonists who named them ‘devils.’

Tasmanian Devils don’t have the security and protection that pack animals such as wolves, dogs, elephants and sheep have. And once they’ve been weaned, devils tend to be solitary.

They’re nocturnal and mostly spend their days alone in hollow logs, dark places and burrows. But when they emerge at night, they often feast communally. Especially if there is a large carcass on offer. It’s usually a rowdy meal with everyone getting snappy and snarly while chomping heartily on bones, fur and organs. A devil can eat up to 40% of its body weight in a day.

Celebrity chefs are very keen on ‘nose to tail eating’ but they don’t advocate fine cuisine involving for fur, hair or chunky bones. The devils are devotees of nose to tail eating, their bite is immensely powerful and they can decimate and digest hard bones. You probably wouldn’t want to be the delinquent devil who gets caught out gobbling up more than your fair share of a carcass.

To attract a female mate, the male devils fight each other. I picture it as being like an old style cowboy Western; the males in a violent frenzy with the females coolly looking on to see who emerges intact.

The devil’s newborns are petite, about the size of a raison. After being birthed they crawl up into their mother’s pouch and don’t emerge until about four months later. The young are known as imps, pups or joeys.

In the past devils were hunted by colonists for their meat and fur and this drove them to the brink of extinction. In the 1940’s they became a protected species. They are now an endangered species with a decreasing population.

Devils live up to about five years in the wild but are under threat from Devil Facial Tumour Disease. Another threat is that the carnivorous devils are partial to roadkill and they’re frequently run over in the dark while feeding. But when they chub up from plentiful food, their tails swell up with stored fat.

Scientists are seeking solutions to the facial cancer and recently there’s been a few breakthroughs.  The Government of Tasmania, Australia Zoo, University of Tasmania and other organizations are all trying to save the Tasmanian Devils.

I’m really hoping the scientists succeed and that the Tasmanian Tiger not only survives in the wild but increases in number.