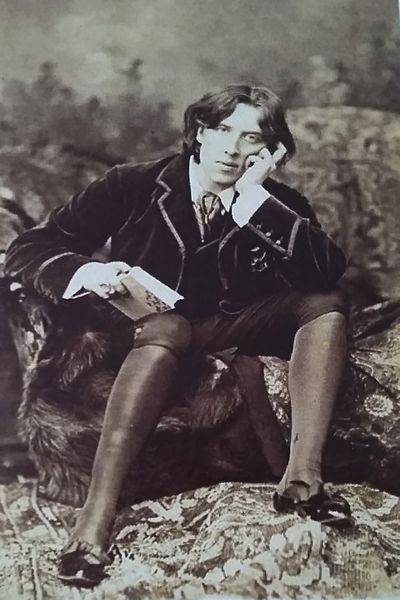 ‘The only way to get rid of a temptation is to yield to it.’

The Picture of Dorian Gray by Oscar Wilde

In Oscar Wilde’s novel, The Picture of Dorian Gray the characters throw themselves around dramatically and rarely ever sit quietly. They fling themselves at the furniture with abandon and sigh heavily. They’re frequently drinking something sublime or noshing on delectable morsels that are ferried about on silver platters by obsequious servants.

Emotions are deep and operatic and there’s no long journeys or tedious parties for us to endure. Decors are vibrant and salubrious and you know deep down in your wicked little heart that everybody is going to end up in tears.

Wilde was educated at Trinity College Dublin and also at Oxford. He excelled as a classicist and was fluent in French and German. Even as a youth he was known for his clever wit, outrageous dress sense, bons mots and engaging, brilliant conversation. After university he moved easily among London’s most fashionable and cultural cliques. He collected art objects and fine porcelain and once remarked, ‘I find it harder and harder every day to live up to my blue china.’

First published in 1890, Wilde’s only novel created a scandal. It’s principally about Dorian Gray’s moral disintegration and the risks of promiscuous reading. Dorian buys multiple copies of a book – bound in different colours to suit his mood – and it’s this decadent novel that sets him on the primrose path to Hell.

Wilde wrote, ‘Dorian Gray had been poisoned by a book. There were moments when he looked on evil simply as a mode through which he could realise his conception of the beautiful.’

Wilde was vilified for what was perceived as his novel’s corrupting influence. This seems bizarre now, given we live in Trumpian times.

In the preface Wilde wrote: ‘Vice and virtue are to the artist materials for an art … All art is at once surface and symbol … Those who go beneath the surface do so at their peril … All art is quite useless.’

Whether Wilde sincerely believed all art is ‘quite useless’ can only ever be conjecture. He spent his life creating wonderful works of literature, journal articles, fairy tales and plays that have endured and been popular for well over a century.

Wilde was  vilified and broken on a wheel while incarcerated in Britain’s Reading Goal 1895-1897. His criminal conviction was for homosexual practices. Had he lived in a different era, this would never have happened. He died destitute in Paris at 46 and was laid to rest in Père Lachaise Cemetery.

In 2017 Wilde and about 50,000 other men were pardoned for homosexual acts that were no longer considered offences under the Policing and Crime Act of 2017.

Back to Wilde’s only novel. While having his portrait painted, young Dorian Gray – a youth of delectable, irresistible beauty, an Adonis, indeed a Narcissus – is seduced by the bohemian ideals of Lord Henry. Basil Hallward is the artist who paints Dorian’s portrait and he senses that something horrific is about to occur.

Henry Wotton is the snake in the garden of Eden who dangles revolutionary ideas in front of Dorian’s nose and seduces him into thinking that libertinism and unchecked hedonism will give him everything he could ever wish for.

Does this work out the way Dorian hopes?

Don’t be silly, of course it doesn’t! But I can’t reveal more because you have to read it for yourself and I don’t want to spoil it for you.

As Oscar Wilde wrote in a letter – ‘Basil Hallward is what I think I am: Lord Henry what the world thinks of me: Dorian what I would like to be …’

Photograph: Oscar Fingal O’Flahertie Wills Wilde photographed in a studied pose by Napoleon Sarony in 1882. Wilde liked to be depicted in languid poses but he actually worked exceeding hard.