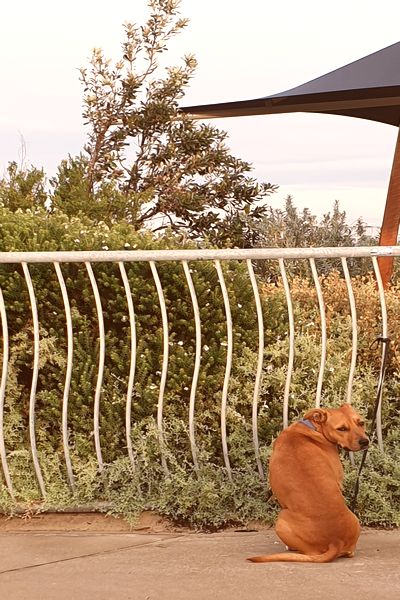 Bayside Melbourne is dog heaven. During shutdown I’ve been walking the beach promenade every day. It provides a complete brain clean.

Many mongrels and pedigree hounds are out there on the beach before first light. I chat to the owners outside the Guilty Moose café, as I pick up my morning takeout coffee. I know many of the dogs names but can never manage to remember their owners’ names.

I don’t have a dog, so when walking the beach I cunningly solicit contact with other people’s dogs. There’s Ralphie, Sage, Harold – there’s also Hank, Henri, Ned and Bella. And then there’s the new puppies, all wide-eyed and eager.

Greeting every stranger with an abundance of trust. Rolling on their backs and exposing their plump bellies.

Running, sniffing, barking, diving into the icy sea, rolling in fetid rubbish and dead birds, chasing balls, Frisbees or anything else that moves, including slow seagulls.

Even the old dogs still get on by; being coaxed along or getting wheeled along the sea promenade in fancy dog wheelies or clapped out kid’s prams. These dogs are the old salts with grey muzzles and patient eyes.

One of the old salts is a tiny mongrel who accompanies his petite elderly owner along the promenade well before sunrise. No matter the season, she’s always dressed top to toe in black. And in summer when she breaks out the faded black shorts, you can see how much dog and owner resemble each other. For they both have sturdy bowlegs and the most marvellous rollicking motion when they promenade.

These two blithely ignore the unspoken rule that you have to stick to the left side of the footpath. After all, you don’t want to get mown down by sweaty blokes in mantights, running behind baby three wheelers, or short fused mothers shoving child pushers the size of small cars.

But nobody gives the lady in black any stick, so she and her mongrel own the footpath. They plough on in a straight line, forcing the belligerent and impatient to go around them. Seeing them always makes me smile. They are true anarchists.

Another old salt was the handsome golden Labrador who used to swim straight across the water, keeping in line with his owner walking along the water’s edge. The Labrador got slower and slower and then one morning he simply didn’t appear on the beach, but his owner continued to show up. And so it goes.

I always look for the red-haired dog owner leading a posse of three small, unkempt terriers across the road. They’re often there before the first light of morning.

When they get to the sea wall the terriers immediately head for the same beach ramp and line up. No kidding, those three dogs behave as though they’re queuing for the gents’ toilet at a football match.

Politely waiting in line for the mongrel in front to lift his leg and piss on the bluestone. And only when the first dog has finished his business does the next one take his turn.

The seawall stretches several kilometres from St Kilda beach to Port Melbourne and beyond – but those three dogs only ever want to piss in one place. The exact same spot, every day, without fail.

Then when they’ve had their designated time running amuck on the beach, their owner leads them back across the busy main road and they disappear around the corner. Still in single file.

Photo by Les Truffle. A local waiting patiently for his owners to get themselves fully caffeinated. Then he can run with the other beach dogs.