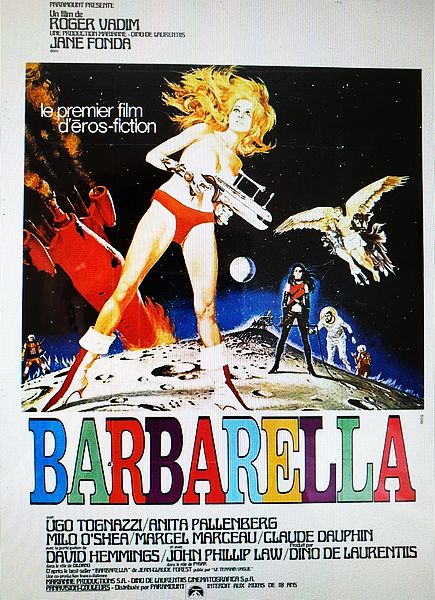 Barbarella psychedella,
There’s a kind of cockleshell about you.
Dazzle me with rainbow colour;
Fade away the duller shade of living.

When it first hit me just how serious COVID_19 was, the original 1982 Bladerunner movie (set in an apocalyptic world in 2019) suddenly seemed prophetic. I wanted to leave planet earth, go off-world and come back later. Perhaps.

Although Barbarella (1968) is also a futuristic Sci Fi movie, it comes at us from a different angle. Directed by Roger Vadim and based on a French adult comic by Jean-Claude Forest, it’s essentially comedic.

Jane Fonda is Barbarella, a high-ranking United Earth Government space agent. Set in the year 40,000, Barbarella’s directive is not to save the earth – she has to save the universe. Aided only by a pink spaceship and an extensive wardrobe of foxy leotards and faux fur tails, accessorized by sexy body armour and hand weapons.

The world Barbarella leaves behind is idyllic, peaceful and opposed to war. Her  secret mission is to find Doctor Durand Durand and bring him back to earth. Brilliant but quintessentially evil, he’s developed a mega weapon of destruction. The Positronic Ray is a diabolical threat to earth.

The central plot is almost secondary to the subplot of Barbarella as an innocent stumbling across a series of sexual adventures. When captured and imprisoned in Durand’s pleasure machine – known as the  Orgasmatron or Excessive Machine – the machine combusts. Barbarella outlasts the machine and leaves it in flames.

Roger Vadim declared his intentions as, ‘The picture is going to be more of a spectacle than a cerebral exercise for a few way-out intellectuals.’

He succeeded. The French-Italian production opens with a zero gravity striptease sequence in Barbarella’s spaceship. Being 1968, Vadim had no computer generated effects to fall back on.

Accordingly Jane Fonda rolled around naked on a large sheet of plexiglass. It was suspended over an image of Barbarella’s spaceship. She was filmed from above to provide the illusion of zero gravity.

Later when Barbarella takes to the skies in the muscular arms of Pygor, the actors wore body harnesses that chafed and tore at their flesh. Frequently they were left with injuries, bruises and cuts. Pygor is handsome, noble and virtuous to a fault – apart from when he ravishes Babarella in his angel’s nest. At one point he murmurs, ‘An angel doesn’t make love. An angel is love.’

When the film was released it was derided by serious critics as glossy trash. But the public loved Barbarella. It was the second-most-popular film in general release in the United Kingdom after The Jungle Book. An interesting point of comparison.

Since then Barbarella has been praised, analysed and applauded by journalists and some feminist film critics. Its imagery has been appropriated for years by creatives and influential designers such as Jean-Paul Gaultier. The film has also been promoted to iconic status by those of us who appreciate comedic, flamboyant Sci-Fi movies.

Noah Berlatsky wrote, ‘Viewers of the film in 1968 knew that hippies nattering on about peace and love wasn’t going to save them. Vietnam ground on no matter how fetchingly Barbarella tossed her hair and lost all her clothes.’

Barbarella is pure escapism packaged in a futuristic Sci-Fi parody. It remains one of my most favourite films.