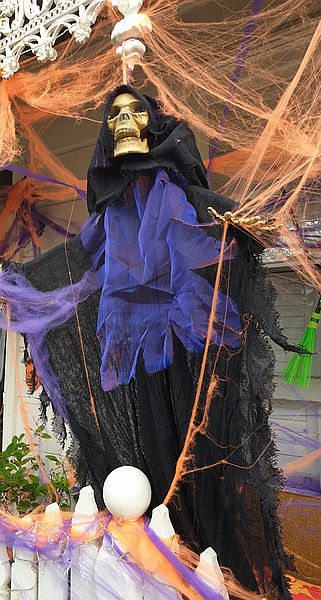 Halloween wasn’t always orange pumpkins, plastic skeletons and job lots of candy. At this time of year Christmas trimmings and Halloween decorations are fighting for shelf space in megastores.  And while nobody was paying attention, Halloween surreptitiously crept over most of October and Christmas decided to manifest early.

In my city life-size effigies of witches and ghouls started appearing on suburban balconies and verandas early October. Followed closely by reams of synthetic spider webs and plastic tombstones casually propped up on nature strips. One local house currently sports ghoulish rubber hands and feet sticking out from freshly dug graves. And so it goes.

As Halloween surreptitiously creeps up on its due date of Sunday October 31, I’m thinking small children might not be able to spot the difference between Halloween and Christmas. But given that hot cross buns are readily available after New Year, perhaps our celebrations are simply blending together?

Halloween as we know it derived from the ancient Celt tradition of Samhain. It was one of the quarterly fire festivals and marked the time when harvests were gathered.

Samhain marked the beginning of the ‘dark half of the year.’ It took place October 31 to November 1. Folk believed the barriers between the spirit world and the physical world would dissolve during Samhain. Ancestors might cross over during Samhain and visit their kin.

There were many myths and stories attached to Samhain and mythological heroes featured prominently. The Celts liked their heroes ingenious, courageous, muscle-bound and reckless.

After the harvest had been gathered, a community wheel of fire was ignited and presided over by Druid priests. Cattle were sacrificed, mead or beer drunk in excessive quantities and there was abundant feasting.

Then when the crapulous revellers finally returned home, they took with them a flame from the community fire to relight their hearth fires.

During Samhain offerings were left for the Sidhs (the fairies) and the Celts would dress up as monsters and animals so the Sidhs wouldn’t carry them off. Other threats were the Faery Host – a posse of hunters who might choose to kidnap the unwary. There were also the wicked Sluagh who were keen to enter folk’s homes and steal their souls.

The Celt tradition of Samhain was of great interest to Pope Gregory III and his successors. In the eighth century All Saints Day on November I – when Saints were honoured –fused with aspects of Samhain.

The evening before All Saints Day was known as All Hallows Eve and in about the sixteenth century it was renamed Halloween.

My favourite Samhain monster is Lady Gwyn. She was a wandering headless woman dressed in white and always accompanied by her stout black pig. Lady Gwyn liked nothing better than to chase crapulous citizens in the midnight hours and reduce them to quivering wrecks.

But Lady Gwyn was a funster compared to the headless horsemen who carried their own heads. Their horses had flaming red eyes and if you had the misfortune to encounter them, it was considered to be a death omen.

When you think about the mayhem, terror fear and jollification of Samhain, it makes our twenty-first century Halloween tradition appear bland and commodified. And burning wheels of fire, Lady Gwyn,  headless horsemen, fabulous feasts and tankards of Mead (honey wine) seem scary and thrilling.