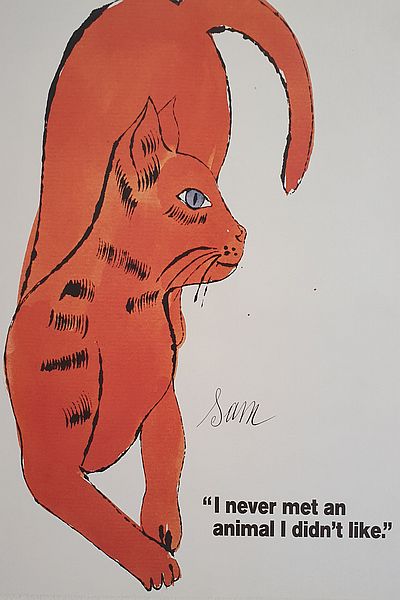 The reason I hate regular underwear – and socks, too – is that if you send twenty pairs of shorts and twenty pairs of socks to the laundromat, you always only get nineteen back. Even when I wash them myself, I get nineteen back. The more I think about it, the more I can’t believe the diminishing returns on underwear. It’s unbelievable. I WASH MY OWN AND I STILL GET NINETEEN BACK!

For most of his life Warhol lived with his mother, Julia Warhola. In the 1950’s he shared an apartment with her while working as a commercial illustrator. Warhol became famous for his vivid, colour saturated, Pop art works.

His subject matter ranged from household cleaners and soup cans to celebrities such as Marilyn Monroe and Mohammed Ali to Blondie (Debbie Harry). Warhol was shameless in his admiration for the bold and beautiful.

Warhol also loved animals – especially cats – and he and his mother ended up with 25 cats after they found a companion for his first cat, Hester.

He once said, ‘I’ve never met an animal I didn’t like.’

Every one of the Warhol cats – except for Hester – were named Sam. Warhol released cat drawings in a limited-edition book – 25 Cats Name Sam and One Blue Pussy.

His mother, also an artist, did the calligraphy. Julia missed the ‘d’ out of named but Warhol decided to retain the original title.

When I read Warhol’s book, The Philosophy of Andy Warhol:  (From A to B and Back Again) I was taken with his theory of the diminishing return of socks and his sly humour.

The book is dazzlingly witty and bizarre, while providing an insight into Warhol’s day to day life and mindset.

The Philosophy of Andy Warhol has been denigrated as being shallow and superficial. And so was the man himself – he revelled in it and played it up.

Warhol openly admitted he really loved money, material possessions and beautiful people. He freely admitted to adoring his own fame, gross superficiality and how he was frequently star struck by other celebrities.

His favourite things were inevitably shallow, fashionable, wildly funny and definitely not Zen.

‘I think it would be terribly glamourous to be reincarnated as a great big ring on Liz Taylor’s finger’.

As I understand from other Warhol biographies, during his pursuit of fame and wealth Warhol developed some dodgy business principles. At his New York studio – known as The Factory’ – the artists, photographers and artisans who laboured to complete his artworks as ‘studio assistants’ were often poorly or never paid, and their contributions rarely acknowledged.

Warhol admitted to being anxious and fearful, particularly when he was younger. But he also claimed that after he’d formulated his ‘So What’ theory, he felt significantly better.

The principle of his theory is that you should simply disengage from any life events and disappointments that leave you feeling wretched and unloved.

In The Philosophy of Andy Warhol, he wrote,

‘Sometimes people let the same problem make them miserable for years when they could just say, ‘So what.’

I don’t know how I made it through all the years before I learned how to do that trick. It took a long time for me to learn it, but once you do, you never forget.’

I’ve often applied Warhol’s theory in practice – but instead of saying ‘So what’ in English, I murmur it to myself in French.

Because it’s pretentious as hell and everything sounds so much better in French. Besides, it seems to work just fine for me.