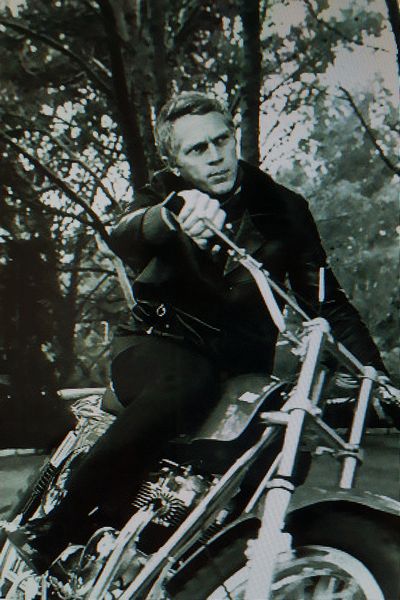 ‘You watch the white line and try to lean with it  . . . howling through a turn to the right, then to the left and down the long hill to Pacifica . . . letting off now watching for cops, but only until the next dark stretch and another few seconds on the edge …’

Hunter S. Thompson rode with the Hell’s Angels for a year and his book title gives a fairly clear indication of what went down. When he voiced his disgust over an Angel’s member beating up a woman, he was set upon by several Angels and given a vicious ‘stomping’.

I used to ride a motorbike until I was wiped out in a road accident when a doped-up driver failed to give way to me. I knew I’d used up all my cat’s nine lives in one go, so I didn’t replace my motorbike which had been pulverized. I was lucky because the force of the impact sent me over the car bonnet.

Motorbikes have always exercised a strange fascination. Part of their charisma is that folk such as: Marlon Brando, James Dean, Peter Fonda (Easy Rider movie) and the eternally cool Steve McQueen (above) had a thing for motorbikes.

Living bayside – in the midnight hours – we often hear a pack of bikies having their own private Grand Prix around the lake. Only the black swans know for sure who they are, but locals whisper that they come from a bikies clubhouse nearby.

Of course there are many motorbike groups who are composed of sober citizens who simply like to ride. In my neighbourhood, the most visible group are the mature gentlemen who ride their motorbikes on Saturday mornings and then crowd out the French patisserie.

With their pots of tea and warm croissants they’re in stark contrast to Hunter’s Hell’s Angels. They have no truck with vintage bikes such as ear shattering Harleys or throbbing, heavy-duty Kawasakis. Instead their pleasure machines of choice are recent model, luxurious BMW motorbikes.

A Ducati owner of my acquaintance got quite heated. ‘Those fancy BMW motorbikes with their tinted shields, heated padded seats, navigation systems, warmed up grips and piped music … that’s not riding a motorbike, that’s cruising in a fucking armchair!’

Prior to owning a motorbike I used to ride pillion with a bunch of university chums. They rode Kawasakis, Nortons, Triumphs and Harleys of the loud variety. Riding pillion was a tad uncomfortable because I sat with my knees raised above the hot metal of the naked exhaust. So I learnt to stretch my legs at red lights. I’d plant my legs on the road and stand, while hovering above the pillion seat.

I got caught out one night when we were in the hip end of town, for what my bikie buddies called a ‘food fix’. So there I was doing my leg stretch when the red lights changed to green and the motorbike screeched off –  leaving me behind, on the road in my bow-legged cowboy stance.

I was laughing so hard that I nearly got run over by the cars behind. I knew my bikie pack were mortified. They had to cruise the entire street in order to execute a U-turn and retrieve me – mocked by sneering hipsters in their cool cars.

The guys I rode with were kitted up in vintage metal headgear or sinister full-face helmets, black leather bikie jackets and black bovver boots. It was the boot of choice for skinheads, university Marxists, Chardonnay Socialists and those who were partial to a little argy-bargy. Often their skinhead bovver boots were fitted with steel capped toes.

It was comedic when I got invited to posh pool parties and discovered that many of these ‘born to be wild’ bikies were being bankrolled by their uber rich, conservative parents.

As Chuck Berry put it, ‘C’est la vie”, say the old folks, it goes to show you never can tell.’

Photo: Actor Steve McQueen rode and raced motorbikes.  Vintage Indians, the Husqvarna 405 and Triumph TR6’s were among  his favourites. Before his acting career took off, he worked as a mechanic in a NY motorbike repair shop.