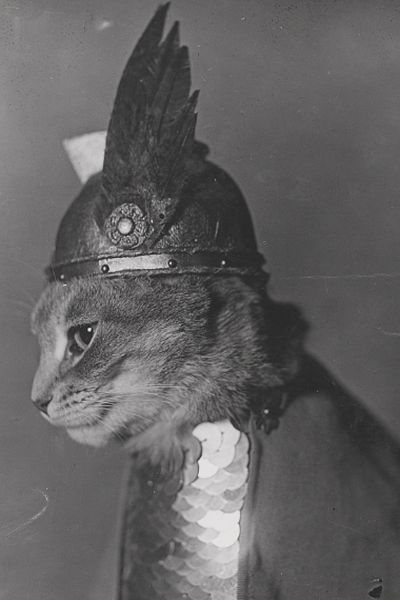 Nigel was a street cat. I first met him in a French cafe in inner city Melbourne when he strolled out of the kitchen and slipped up onto my lap. He made me laugh. To hell with health regulations, he’d settled in for the evening. Nigel had no interest in the food on the table, he just seemed to want our company.

The owner of the café told me he’d been abandoned. His owners had moved out of Fitzroy the previous year and the cat got left behind. Gregoire had been feeding him fine French cuisine ever since. The cat was something of a gourmet and very partial to chicken breasts marinated in tarragon, wine and garlic. He visited the cafe every evening and dined sumptuously.

Gregoire told me the cat had beautiful manners. He adored the cat but couldn’t give him a home because there was already a chubby white Persian on the premises. And the two cats hated each other. The white cat was known to be something of a diva. I was there when a cat lover attempted to gently stroke the white cat – and the cat sank her fangs into the woman’s hand. Everyone was gobsmacked but Gregoire skillfully defused the situation.

Winter was closing in. Gregoire suggested I adopt the black cat and I did so after I heard he’d just been attacked in the alley by a couple of local dogs. A friend and I went down the back alley one night, found the cat and put him in my wicker picnic hamper. No panic. No distress. He just settled down for the short drive back to my apartment. We kept checking the hamper but he was preternaturally calm. Maybe he’d detected the ghosts of the delectable roast chickens that had passed through the hamper the previous summer?

At my place he leapt out of the hamper, dined elegantly and then made himself comfortable on one of my faux fur barstools. No dramas, no looking for an escape route. He sat between my friend and I and the only time he growled like a dog was when I moved off my stool to fetch more champagne.

I’d planned on keeping him inside a day or two before letting him out. I didn’t want to tag and collar him too soon in case he decided to leave and return to the alley. For eighteen months he’d relied on the kindness of strangers, and if he was wearing a collar folk would naturally assume he had a home.

But that night I realized Nigel had zero intention of going anywhere. So I let him out before he retired for the night. It was foggy and the grass was wet. I watched over him as he quickly did his business and then scuttled back to the warmth of the kitchen.

So the next day I got him sorted at the vet. Antibiotics, worming, nails, ears, the works – including an examination that involved a rubber glove and lubricant. I had to look away. His wounds were examined and teeth checked for later dental work. No problemo. Nigel eyeballed the vet’s every move but remained placid. Perhaps he knew that we were only trying to help him? He relaxed once he was back in the picnic hamper and even took a kip on the drive home.

And so began a beautiful friendship.