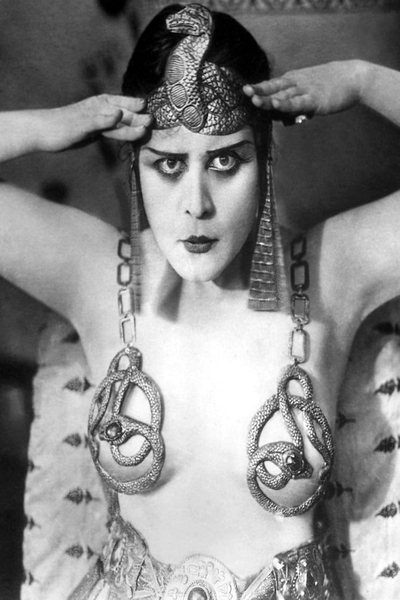 Cleopatra V11 – born around 69 BC – was an object of fascination and gossip even in her own time. She was a child goddess who was married off to her brother and became Egypt’s queen at eighteen. After many poisonings, killings, plot twists and turns, Cleopatra went on to control most of the eastern Mediterranean coast. She also cunningly expanded her empire with the backing of of Rome.

I wish that Cleopatra’s Alexandria still existed. It’s architecture, ship building, culture and devotion to the arts was unsurpassed in the ancient world. Alexandria had colonnaded streets to supply shade even at midday, a shimmering lighthouse, well-appointed gymnasiums, magnificent theatres and the most extraordinary library of its time.

Unfortunately the entire city of Alexandria is now buried under the sea. Following a Fifth Century earthquake, Cleopatra’s palace collapsed into the Mediterranean and vanished forever. And strangely enough, the Nile River changed course.

There have been several films about Cleopatra and to date they have been fantastical epics. Despite what we have been led to believe, Cleopatra was not beautiful.

In the biography, Cleopatra A Life, author Stacy Schiff does a great job of bringing Cleopatra to life. Cleopatra comes off as being an enormously gifted ruler: shrewd, pragmatic and well able to hold her own against the domineering Roman warriors who were sent to control her and claim the phenomenal wealth that Egypt possessed. Neither Caesar not Marc Anthony could resist her charm.

It seems that the real Cleopatra had little in common with the voluptuous beauty, Elizabeth Taylor, who appeared in one of the costliest and most derided toga dramas of all time. Cleopatra – made in 1963 – nearly bankrupted 20th Century Fox. The Shakespearean actor, Richard Burton played Marc Anthony; the barrel-chested, Dionysian character who denied his Roman self in order to further his own career while pleasing Cleopatra.

Taylor admitted that at one point, during a riotous procession, she thought hundreds of film extras were going to turn on her and things would get nasty. They didn’t, because like the rest of the world the extras were entranced by the Taylor-Burton debacle and the awe inspiring legend of Cleopatra.

In Cleopatra A Life, Schiff assiduously sorts through the historical data on Cleopatra and comes to the conclusion that she was frequently represented as an objectified woman. Everyone from Cicero to Shakespeare used her to their own ends and in the stoush Cleopatra was defamed, reinvented, abused, sanctified, venerated and scorned in equal measure.

There is a long-in-development Sony biopic based on Stacey Schiff’s book. If it eventuates, it will be interesting to see how Cleopatra is represented. Will she still be depicted as the Royal whore?, the temptress?, the audacious scheming femme fatale who ‘ruined’ Caesar and Marc Anthony? Or will Cleopatra become something much more interesting?

Ah, Hollywood! At least if Bollywood got it made we could have some fun in the cinema again. Hrithik Roshan could curl his luscious locks and sort out Marc Anthony. And Salman Khan would look swell shimmying around in white toga and gold laurel leaves as Caesar.

According to Schiff, what Cleopatra had in spades was: wit, personality, charisma, intelligence, playfulness and a heart that had been steeled by the vagaries of life within the Ptolemy dynasty.

Cleopatra V11 was a survivor, a dealer in poisons who knew how to play the Romans to get what she wanted for Egypt. Interestingly enough rather than being Egyptian, Cleopatra descended from Macedonian Greeks.  And no – it probably wasn’t a delinquent Asp reclining in a basket of plump, ripe figs that got her in the end.

I’d love to tell you –  but it would be a spoiler.

Photograph: Theda Bara vamping it up in the audacious 1917 silent film, ‘Cleopatra’. It had lavish sets, sumptuous costumes & was filmed in California. Unfortunately Fox’s last two prints of the film were lost in a fire in 1937 at Fox Studios. Only a few brief segments of the original film are known to exist.