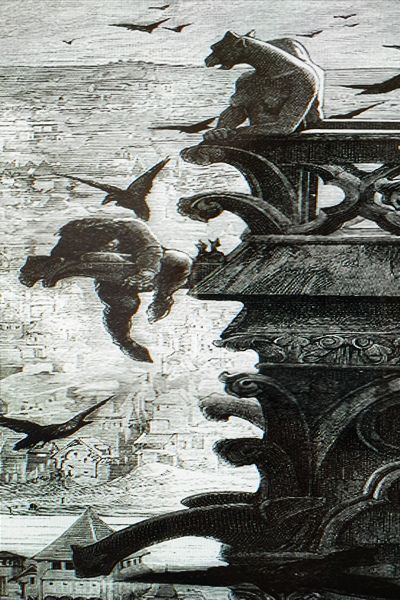 The Heart and Soul of Paris

Notre-Dame Cathedral is widely perceived to be the heart and soul of Paris. The first time I visited Notre-Dame on the Île de la Cité, it was wasn’t just the cathedral’s sublime beauty that captivated me. It was the fabulous French Gothic architecture, accentuated by the most extraordinary gargoyles.

Also known as Our Lady of Paris, the cathedral has been a source of inspiration, controversy and mystery ever since the first stone was laid in 1163. The initial construction  was completed in 1345 but the famous Notre-Dame gargoyles were not installed until 1831.

Gargoyles were a big part of my childhood. My English mother purchased several gargoyle reproductions in Paris on her honeymoon. Gargoyles loomed at us from the bookshelves and a larger gargoyle – gnawing on what appeared to be a human shin bone – dangled a mellow light over the open fireplace. It was their bulging eyes that killed me. Especially when the fire was crackling, incense burning and the room lit with only the gargoyle lamp.

As a child I thought one of the most exciting places you could possibly visit was Hell. I also suspected the gargoyles knew my deepest secret fears. Sadly, my mother’s gargoyles were later stolen from her home along with other mementos, valuables & antiques. Perhaps the gargoyles will exert their strange mystique over the thief who stole them?

Gargoyles can appear frightening because they’re monsters, wild beasts and fantastical creatures. The myth is that gargoyles keep evil forces and demons away from a church and protect its sanctity.

Paris is widely believed to be a place of great beauty. The City of Light is venerated for its sublime cuisine, splendid museums, galleries, architecture and chic fashion. But Paris also has many dark secrets that are not so willingly revealed.

Shortly before Paris was liberated by the Allies in August 1944, Adolf Hitler ordered the total destruction of the City of Light. It’s claimed the German army placed explosives in readiness under bridges and around famous monuments such as the Eiffel Tower.

Hitler is believed to have sent several angry dispatches from Berlin demanding – ‘Is Paris burning?’

The last Nazi commander of Paris, General Dietrich von Choltitz, claimed he disobeyed Hitler’s orders and saved Paris from destruction.  However, several French historians have discredited him. They insist it was the French Resistance and the Allies who saved Paris.

The controversy has never been resolved. The Nazi commander’s son told The Telegraph, ‘If he saved only Notre Dame, that would be enough reason for the French to be grateful.‘

I’ve been rereading Hal Vaughan’s non-fiction book, Sleeping with the Enemy. Coco Chanel’s role as a Nazi Agent is fully examined. It’s an unsettling, well researched book which challenges the myths immortalizing Chanel as a heroine of France during WWII.

Anne Sebba’s fascinating book Les Parisiennes details the Parisian lives of women during WWII. Sebba researched the lives of many women – not just traitors & collaborators such as Chanel – but also the writers, professionals, sex workers, teachers, actresses and resisters.

The surprising popularity of Netflix’s, Emily in Paris – an American comedy-drama – speaks volumes as to how television moguls, scriptwriters and directors perceive Paris. Many French critics loathe the series, on the grounds it stereotypes the French and is heavy on cliches and false assumptions.

I guess at least it was actually filmed in Paris – which hasn’t always been the case with many movies set in Paris. For decades movies set in Paris were filmed on sound stages. The classic movie, An American in Paris (1951) was filmed at MGM on about forty-four sets. In California.

But as Humphrey Bogart murmured in Casablanca. ‘We shall always have Paris’. And it seems we shall also have Notre-Dame Cathedral.

Following the devastating fire at Notre-Dame in 2019, French President Emmanuel Macron stated, ‘Like all our compatriots, I am sad this evening to see this part of us burning.‘

After numerous setbacks and pandemic complications, the cathedral is being painstakingly restored to its former magnificence. It’s an incredibly expensive business. And many wealthy folk – who’d initially pledged donations – have reneged.

To help cover the cost, we can now make a modest general donation or perhaps choose to ‘adopt’ a Notre-Dame artifact/art piece to help pay for its restoration. Fortunately, the gargoyles are also up for adoption. I think it’s a great idea.

Image above: detail from Victor Hugo’s, The Hunchback of Notre Dame, illustration by Luc-Olivier Merson 1881. The laconic gargoyles appear to be observing the male figure desperately clinging to the building.