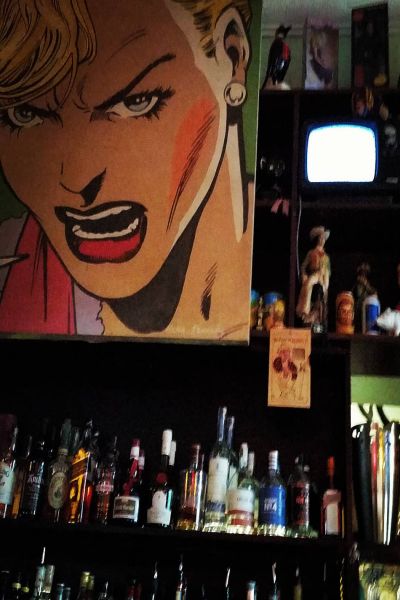 I often sneak back to the old neighbourhood to meet friends. It’s become increasingly gentrified; old houses have been tizzied up and sold for exceedingly high prices. Subsequently many of the artists, writers, junkies, musicians, booze hounds, photographers, dressmakers, poets and reprobates, I once knew have moved on.

Some wisely moved up the coast to Byron Bay or disappeared overseas to live, whilst others crossed the river to suburbs that hadn’t gone upmarket. Leaving Fitzroy was the only option once rents skyrocketed and the old rental houses and gnarly old flats that had housed us all were gobbled up by property developers.

The saddest part about seeing an inner-city neighbourhood going upmarket is the destruction of magnificent old buildings. Due to the way the Heritage Laws work, this often means they end up being victims of facadism. The guts of many 19th and 20th buildings are ripped out and all that remains is the outer façade. Contemporary buildings are then blended with the original façade, but the building’s heart and soul are long gone. Leaving nothing behind except a few earthbound ghosts.

It can be spooky walking down a city street late at night and realising that hidden behind the façade of what was once a classic nineteenth century commercial building sprawls a massive supermarket. And that the top floor and roof has been ripped off to provide an open-air carpark where nefarious activities occur after hours.

But here’s the thing folks. There are still some pubs built in the 1800’s that have retained their original purpose, grace and style. How? Because some publicans flatly refuse to give into pokie machines, flat screen panels or serious renovation jobs that would suck the life out of their old school pub. The toilets and kitchen are usually re-plumbed and renovated but the pub still looks essentially the same as it always has.

My favourite pub was established in 1866 during the city’s boom period. The hotel is directly opposite the magnificent Fitzroy Town Hall built in 1863. This pub is chockers with old memorabilia: faded football photographs, old Fitzroy football jumpers suspended from the roof and 50’s to 80’s kitsch piled up on the wonky shelves. There’s a small black and white flickering television that sulks on the top shelf – flickering silently with snow static. There’s also a modest colour television in the front bar but the sound is always turned off in favour of music.

And tucked under the bar – where the wooden bar stools are all lined up – are little bronze hanging hooks for your bags and jackets. I love all the old dark wood in the joint, the wooden tables and stools and the creaking sound the floorboards make when you walk across the bare boards in your cowboy boots. And if the beer keg runs out, one of the bar tables has to be moved, so that the barman can lift the trap door and go down to the worn cellar steps to change the kegs over.

Leadlight windows tinge the fading sunlight and the façade is unchanged. There’s a small tower over the corner of the building, decorated with a unique rose motif. Inside the pub the lighting is warm and low and it’s especially cosy in winter when the open fires are lit. But in summer the aircon operates at full bore and it’s a great place to retreat to post beach. You can sit in the front bar sipping an icy cold vodka and soda and listen to the Town Hall clock chime the hours.

What’s more, the food that is served is recognizable. You know what the hell you are eating; it doesn’t need to be explained. It’s fresh produce, cooked simply but with flair, style and utterly delicious. Bar food that acknowledges that we’ve moved on from meat pies and rare steaks with three veg. Delectable food that caters to punters who are familiar with culinary diversity; Sunday roasts are listed on the blackboard menu next to curries, vegan burgers and risottos – and everyone is happy.

Locally produced beers are all on tap, as well as all your usual adult beverages. A coffee machine that would please a professional barista, sits at the ready but the tea drinkers are not so well catered for.

Last Sunday it seemed all the Bushell’s tea bags had run out. The barman searched all the 70’s kitchen canisters next to the coffee machine but found nothing. Nobody – including the tea drinkers – gave a rat’s arse. The punters were united, ‘ Oh come now, it’s a bar for godsake. ‘

Photograph: The front bar at the Napier Hotel, Fitzroy.