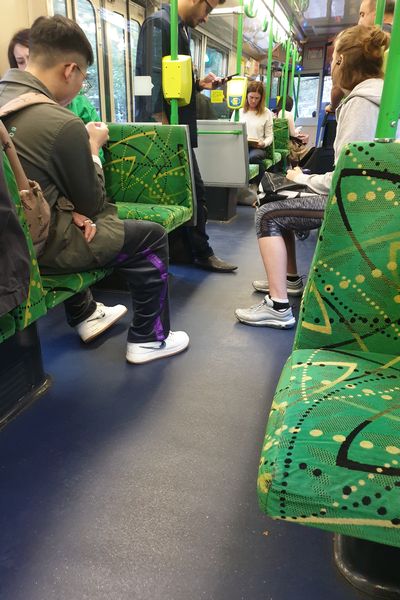 Melbourne’s denizens love to moan about public transport. It was recently noted in the press that currently we have the largest network of trams in the world – yet we still have no train line out to Melbourne airport.

Whenever train and tram seating gets a makeover, there’s inevitably a good deal of public judgement and scathing reviews. Seat cover designers endeavour to produce a pattern that disguises wear, tear and coffee spillage. But the disconnect between functionality and style inevitably leads to public complaints about garish colouring and squiggle patterning.

Despite the discord, there exists one particular group who are dead keen on public transport. And they proudly sport the seat cover designs on specially made T-shirts and windcheaters. They call themselves NUMTOTs – New Urbanist Memes for Transit Orientated Teens. The Melbourne group are very active on social media and they’ve gained a large following.

A few months ago when Prince Harry and his wife Meghan Markle visited Melbourne, they were treated to a short tram ride up Albert Park’s main street to the city beachfront. Harry and Meghan then alighted to walk on the wet sand for a few minutes, did a brief meet-and-greet and gazed out across Port Phillip Bay at the West Gate Bridge and the gloomy docklands. It’s much more delightful when lit up at night.

The royal visit required maximum security and by the time all the schoolkids had lined up behind the metal barriers with their parents, locals and loitering passer-by’s there wasn’t much room to manoeuvre. Some local ladies paid homage to Harry’s grandmother – Her Majesty the Queen – by wearing hats, gloves, stockings and floral frocks. Seated at outdoor tables next to the tram stop,  Ladies who lunch slurped down Sake and succulent noodles at the Japanese restaurant while waiting for the Prince. There was considerable hilarity all round.

The best view was had by a bunch of urban hipsters, leaning over a crumbling balcony situated above the tram stop. Clutching champagne glasses and dressed in glittery retro outfits, they gyrated to 70’s disco music modestly amplified to suit the occasion. Locals craned their necks upwards and there was some restrained toe tapping in the crowd below.

The back streets were bumper to bumper with security vehicles and marked and unmarked police cars. Then just moments before the Prince arrived, they all converged on the tram stop. Quelle excitement! There were two trams – the same model in the photograph above – except both trams had been groomed to the max. The upholstery had been revived, graffiti removed, scratched glass replaced, floor coverings refurbished and all the paintwork resprayed. A trio of ladies who lunch loudly debated why a pair of Melbourne’s vintage W-class trams hadn’t been styled up for the grand occasion.

However, any NUMTOTs present would have been thrilled by the royal trams makeover. But time has passed, the two trams have lost their gleam and now it’s business as usual.