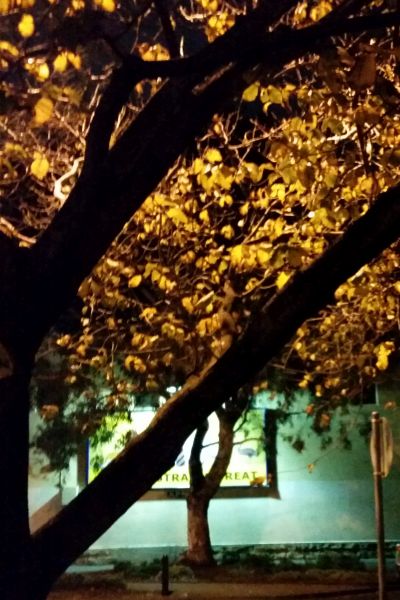 Having an autumn lie-in.

Today is the last day of our autumn and tomorrow winter comes to town. It’s been a superb autumn; because it’s been so dry, the leaf colours have been exceptional. There’s been whole carpets of gold and red leaves to shuffle through late at night when there’s a special stillness in the chill autumn air.

I love winter and look forward to unpacking my Euro filled down doona and breaking out the disreputable fake fur coats stashed in the back of my wardrobe. I’m already thinking of mulled wines, molten cheese toasties, pubs with open fireplaces and the sound of night rain on my garret roof.

Meantime friends and colleagues are battening down the hatches. They loathe the winter and dread its arrival. It’s not wise to rhapsodize about the pleasures of winter, when your friend has been bought low by flu and is morbidly fantasizing about their recent vacation in warmer climates.

I was raised as an English girl and in winter this involved prickly woollen thermal undergarments and fat globs of Vick’s Vapour Rub. Much as I like gum trees, the smell of Eucalyptus oil still triggers memories of scratchy wool and inhalations of vapour rub.

It’s strange how smells can take you back to childhood and often it happens when you least expect it. For some reason the smell of vanilla essence, when used in cooking, always provides nostalgic feelings of pleasure. But I can never remember where this memory comes from.

Apparently, Marcel Proust – he of the French madeleine cakes that triggered nostalgic childhood memories – went through several drafts of his famous novel, Remembrance of Things Past (À la recherche du temps perdu). In the first draft it was toast with honey that inspired nostalgic memories. In the second draft it changed to a biscotto and finally by the third draft he settled on a small, soft madeleine cake.

Thanks to Proust the simple madeleine became one of the most evocative and powerful metaphors in French Literature. Baked in scallop-shaped moulds and flavoured with lemon or almonds these little cakes went on to become more famous than its showier sisters. According to Proust it was the quick dip in hot tea that did it, for the tisane/tea bought out the full flavour of the madeleine and released a rush of involuntary childhood memories.

Not everyone is as keen on memories as Monsieur Proust.

‘One of the keys to happiness is a bad memory ’. Rita Mae Brown